I took the first of these pictures one year ago tonight, as I first arrived at DFW Airport, for what would become known as the “airport protests.”

My dear Muslim friends, Alia Salem and Omar Suleiman has urgently texted us just as the Sun was setting on a Saturday night, to let us know that travelers were being detained at the airport, and were likely to be sent back to their home countries.
Could we come to the airport and join them?
There were only perhaps a hundred or so protestors when I first arrived. By the time the evening was over, there would be thousands. By the time the weekend was over, it was perhaps as many as five thousand. 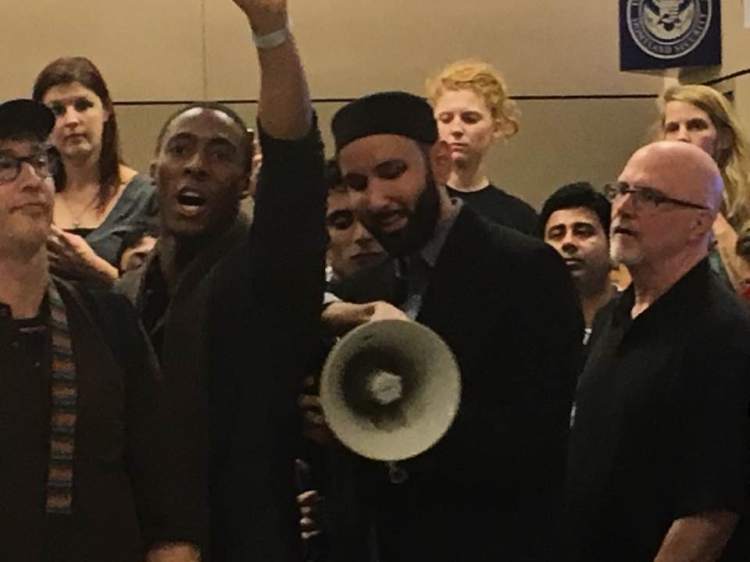 These stunningly beautiful organic protests of that weekend had led to the release of all those involved….had led to hundreds of lawyers who descended on the terminal to provide their assistance…had led to our Mayor and County Judge bringing flowers to some of the freed detainees, and saying to them, “We’re so sorry…this is not who we are….” 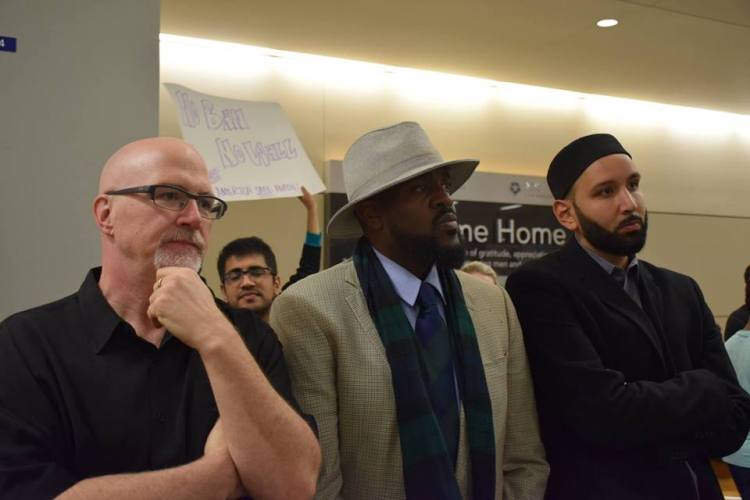 It was a ridiculous ban to begin with. But it awakened a passion and energy that has not waned.

But now, all of that has led to much more…

The Women’s March and the Airport Protests, early last year, are now morphing into genuine political and social movements of people working to change our country for the better. People of all faiths, races, genders, orientations and religions are finding each other and speaking up.

For me, those amazing hours (and I was at the airport until 2 am that first night) were the spark to what is becoming a powerful fire in our country today.

Yes, dear God, yes….it’s exactly what we look like when we stand up to our full height, overcome our fears, and come together.

And it was a beautiful, beautiful thing…

I will never forget Elnaz, a young PHD student at SMU, who was awaiting her family’s arrival from Iran. I stood next to her for hours that night, while she nervously awaited word. It didn’t come that night, and she left to go home. She and her husband waited for hours for news of their loved ones. Finally, at 2 am, they curled up their little American flag and were told by reporter Robert Wilonksky: Your loved ones will be detained all night. They won’t be released at least until the next day.

It was her family that our Mayor and County Judge would greet so warmly, with apologies, the following day….trying to make up in some small bits of hospitality for the cruelty Trump’s Travel Ban. (And my brilliant friend, Alia, who helped to bring the reunion together…)

Some months later, I checked on Elnaz, and she sent me this note…which is perhaps the best summary of all of what those protests meant. I’ll close these thoughts with her words to me, since the protests were really about folks like her to begin with. She sums it up well:

“Thank u Eric, my family is enjoying their trip and my father finally got to see his relatives, who migrated to US long time ago, after 30-40 yrs. I appreciate u and all American ppl whom their heart were with ppl like us, the memory of that day is not faded cause I always try to remind myself of all the stories of those two days, Jan 28th and 29th. I remember that so many Americans, whom their lives would never be affected by the travel ban, came to the airport just for humanitarian reasons. I always remember the dignity of this nation. I also remember the humiliation and racism that I felt after I heard abt the travel ban the night before and I understood no matter how much u try, ur still limited by the boundaries that u r born with, nationality is one of them…
That story had deep deep effects on me, I had always considered myself as a caring person but after that experience I try to be more caring abt other ppl everyday.
God bless u too”