Now and then, you may have heard me make the assertion that Dallas County has turned “Blue” and that it is unlikely to turn back, in any seismic way, for the foreseeable future.

This issue comes to me today because we’re on the cusp of the 50-year anniversary of the Kennedy assassination. The other night, I spoke with Bill and Nancy Holmes on the phone.

Bill was pastor of Northaven (the church I now serve) in 1963, after Kennedy was killed here. He, and just about every other objective observer at the time, made the assertion that Dallas was conservative — even far-right in its politics– at that historical moment. (The new book, “Dallas 1963” chronicles this better than any other source I know).

Nancy tells me they’ve done quite a few interviews the past few months. (If you don’t know why folks are interested in interviewing them, check out my own blog here, of this WFAA story…)

Invariably, journalists always ask them, “What is Dallas like today?”

She says they demure on that question since they haven’t lived here in 45 years.

Well let me step in and answer the question they can’t.

As somebody who does live here, in the same job as Holmes, and who’s paid pretty close attention to changes in our city/county, let me offer some statistics. Not sociological observations. Not personal anecdotes.

There’s no better way to answer this question than to look at the highest level voting data available: Presidential election results.

Presidential election results provide us the best possible objective data, since they are high-turnout, high-motivation elections. People who don’t turn out for any other elections turn out for these, and vote in higher numbers than in any other cycle. So, it gives you the best snap-shot of who actually lives in a given county, and which way they “lean.”

So, let’s take a look at Dallas County presidential election results from the Kennedy/Nixon contest of 1960, through Obama/Romney in 2012:

There are obviously some years where things drew closer:
— 1976, when folks were still angry at Nixon
— 1992, when Ross Perot stages his quixotic campaign and brought down the totals for both sides.

So, if you look at the data, say, every ten to fifteen years, and then look more closely at the recent ten-year trend, here’s what the curve looks like: 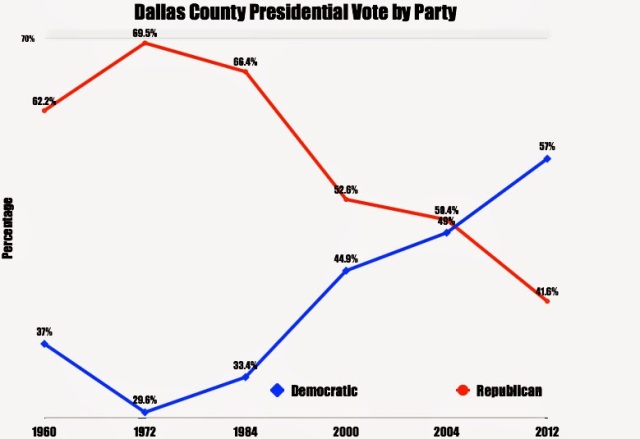 You can see a very clear trend over the past twelve years. Dallas has turned Blue. And the growth appears to be consistent.

When folks say, “Dallas used to be a very conservative place,” you can see how that’s true. Even when Kennedy/Johnson was winning Texas, Dallas County was voting Republican. That’s really impressive.

And, wow, did Dallas County (and the nation) not like George McGovern.

But throwing out Reagan and Perot, you can see the overall trend pretty starkly.

And even if you want to say “Yes, Eric, but Obama has been an anomaly. It won’t be the same next time…” Then I will invite you to look back at 2004…

That year, George W. Bush almost lost to John Kerry, squeaking out a one percent victory. And, don’t miss this: in GWB’s home county!!

The better comparison then, is 1960 to 2004 and how far Dallas has come when two so-called “Massachusetts Liberals” were on the ticket.

I bring all this up because, now and then I’m in some social setting and this is the conversation. Sometimes I’m with Dallas friends. Sometimes with national friends. And in both cases –among both Republicans, Democrats, and Independents– there is often incredulity.

I’ll say, “You know, Dallas has turned Blue,” and they’ll look at me with pity.
Like I’ve just said “I saw Bigfoot in my backyard last night.”

It’s always a frustrating moment, to know the data absolutely supports what you’re saying, but to also know that everybody’s “conventional wisdom” (progressives, moderates, and independents) is still stuck in what they know of Dallas’ past.

So, let’s look at that too.  Here’s the same high-level presidential election data from the Obama/Romney election, from the four most populous counties in North Texas: Dallas, Collin, Denton, and Tarrant.

Those four make up the heart of the Metroplex, and should give us a very good sense of what the situation is.

Yes, in this environment a 54-46 split is still a healthy win.

But my point is not to prove that North Texas as a whole is “Blue.” Just that it’s not “deeply conservative.”

North Texas voting, on the main, is not like the massive Dallas County Republicans numbers from, say, any time between 1960-1984. (Look back at the first Dallas County chart to see what I mean by this)

Often North Texas observers appear to assume that our voting is still at those shockingly high Republican-numbers from decades long ago.
But, that’s not a factual view.

Is Dallas County solidly “Blue?” Yes, absolutely.
Is North Texas “Deeply Red?” I don’t see how you can say that with a straight face.

Most frustrating of all is when I hear journalists repeat the falsehood that “Dallas is, today, a conservative city” or that “North Texas is deeply conservative place.”

I’ve heard it several times this past month. Once on KERA, during the THINK Program, and from a Dallas Morning News reporter who was the guest that day. And once from WFAA’s John McCaa, in a story looking back at the Kennedy assassination that featured Bill and Nancy Holmes.

McCaa did an excellent job, reviewing the history of Dallas at the time. But one line jumped out at me and made me wince.

McCaa opined that Dallas still, “prides itself on being conservative.”

Again, as we’ve just discussed, that’s a fine opinion. But the data simply doesn’t support that claim. I am sure many people do pride themselves on being conservative.

Are there many conservatives in Dallas County?
You bet. Very nice ones. Forty one percent of the City/County, statistically.
Friends I’ve known my whole life, and members of my family.
Decent, decent human beings, and loving people.

Are there lot’s in North Texas?
Yep. Even a majority, still.
But not enough to claim “North Texas is deeply conservative.”

North Texas is, more and more, evolving to be much like the nation as a whole…very close to a statistical tie between conservatives and progressives.

The most accurate description would be to say that the City/County of Dallas trends solidly to the “left-of-center.”
And that North Texas trends just to the “right-of-center.”

Fifty-years after the Kennedy assassination –the event that first trained the inquiring eyes of the nation onto Dallas’ politics– it’s important to look at how things are now; not just how we remember them to be.

Btw, my favorite wonky stat is even more mind-blowing than all this:

Not only has Dallas turned “Blue,” but Dallas is the “Bluest” county in Texas.
That’s right Austin, read on, and weep.