How is it that I am this sad today, about the death of Mr. Peppermint? A few moments ago, I was in literal tears, followed by a feeling embarrassment.

I wasn’t a close friend, like others here in Dallas can say. I didn’t know him through theater circles, as some drama-friends did.

But like an entire generation who grew up here, Mr. Peppermint meant a lot to me. And I’m deeply sorry to hear he’s gone.

For the unenlightened, Jerry Haynes, aka Mr. Peppermint, hosted a children’s show, mornings on Channel 8 here in Dallas. Think: Captain Kangaroo for North Texas kids. He played the character in two stints that lasted almost 30 years, starting in 1961 and finally ending in 1996. 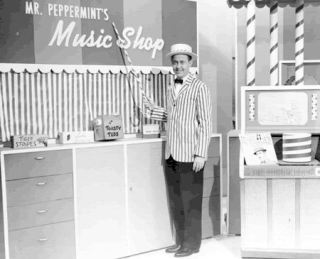 He was also a well known actor in the Dallas community, and from what I’ve been told by actors and theater people, he was respected and loved by almost everyone who ever met him. For those of you outside Dallas, you may remember Jerry Haynes for his role in the movie “Places in the Heart” as Deputy Jack Driscoll.

It’s lovely to hear all those writing in about how they knew him personally, how he was a kind and decent human being. But for me, and for several generations of Dallas kids, he was larger than life, bordering on mythological. He was living a superhero. But he was from Dallas. He was our local superhero.

I remember my Mom taking me to see Mr. Peppermint at NorthPark Mall, and getting a black and white publicity picture of him that I put up on the wall of my room. My Mom also bought me a peppermint-striped walking cane, and a straw hat, just like in this picture… 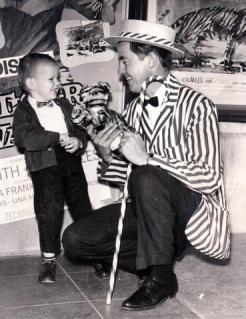 See that kid? Could have been me. It was me.

Mr. Peppermint always began his show with a segment that had him walk through the studio, and dramatically point his cane at various parts of the room; an action that apparently caused the lights to come on. To my five-year-old mind, it was more than just a staged movement. I didn’t know what that was. To me, it was MAGIC.

Mr. Peppermint had magical power over electric light itself.

Time after time, I would dance around the living room, in cane and hat, recreating this same scene.

Somewhere during the time his show was off the air (1969-1975) I was moving out of that “magical” time of childhood and into the harsher reality of adolescence. We were members of Lovers Lane UMC and so, apparently, were Jerry Haynes and his family. In one of the most stunningly confusing moments of childhood, I passed him in the halls of church one morning,  apparently on the way to pick up his own child from Sunday School.

I remember staring at him in awe, and if he noticed he didn’t let on. In that moment, he became  just “Jerry Haynes;” a guy with Mr. Peppermint’s face, but wearing a regular suit. It was like walking into your neighborhood Starbucks to discover Santa Claus has retired and become the morning-shift barista.

I’m sure that moment happened more than once for him. In a sense, it did for me too, because I got used to seeing him each Sunday, and gradually grew used to the idea that there was a man named “Jerry Haynes” who was not just Mr. Peppermint, but a real-life flesh and bones guy.

Here’s a nice slideshow of images about Jerry Haynes.

By the time Jerry Haynes went back on the air for his second stint as Mr. Peppermint, I was moving into junior high and high school; well beyond the time of childhood heroes.

In fact, “feeling into” my sadness today, I sense it comes from recalling the loss of that magical childhood time and the inevitable movement into the reality of adulthood. Eventually it dawns on you that nobody turns on the lights by pointing a candy-striped walking-cane at them, and each childhood “Mr. Peppermint” eventually becomes just a “Jerry Haynes.”

And, even more than this, I think, the sadness is knowing that not even being a superhero like Mr. Peppermint can save you from the ravages of time itself; a fact I’m certainly feeling myself, and seeing more in the lives of friends and loved ones too.

I heard about his Parkinson’s disease, and I know enough about that disease to know that his last years were surely difficult. Likely, too much reality and not enough mystery and magic.

However it is that we die, all of us deserve to be remembered at our best and our most magical. I am sure that his close friends and family will remember him in so many varied and personal ways at many points of life.

But even as a man who grew to know who Jerry Haynes was, I will still always be most grateful Mr. Peppermint, and remember for what he meant to this six-year-old boy.

One thought on “Goodbye, Mr. Peppermint”