Perhaps a decade ago now, I got a call from a reporter with The Dallas Morning News who was working on a story, and wanted to interview me. The story was on the so-called rise of “Progressive Christian Churches.”

We talked on the phone for about an hour. She sent a photographer to the church to take pictures of me, walking around our new building…then under construction.

Although it was her story, and she’d talked to others before me, she’d seemed sincerely shocked, throughout the interview, to find Christians who opposed the Iraq War, who supported a woman’s right to choose, who stood up for LGBTQ rights, believed in science and evolution. With every answer, she seemed more and more shocked. And, dare I say, intrigued.

But there was one question from the interview that stuck with me, all these years. It was near the very end of our conversation. She asked,

“So, how come we don’t hear about you guys more often?”

I paused for a moment, wondering if I should give her the truthful answer or not. I decided to go for it.

I said, “Because you never call us. Because, when there is a some social/political issue in the world, the media calls the pastor of Prestonwood Baptist, or First Baptist, get a quote, and then posits that as the response from “all Christians.””

The phone line went silent for a moment. We exchanged pleasantries, and the eventually story was a good one.

And while none of that final question made it into her final story, that little exchange came back to me last night, as I read online reactions to the Democratic National Convention.

Of note, there was this particular tweet, from one conservative pundit…. 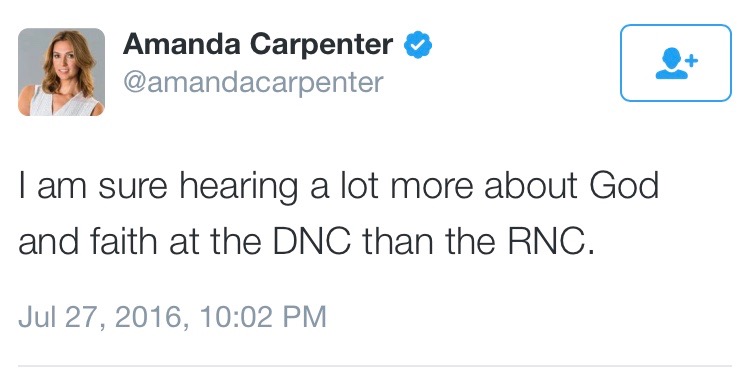 This was not an isolated reaction. Pundit after pundit —left, right, and center— commented on this seemingly novel and unique burst of faith and patriotism from the Democratic Party.

As if patriotic and faithful progressives were some newly discovered genetic mutation in the political DNA of Americans.

They pointed to the speech of Rev. William Barber. It was an amazing speech. It was perhaps a highlight of the night. Take a look…

Rev. Barber has been a leader of something called “Moral Mondays” in North Carolina. A movement of faith leaders that have come together to have a positive impact on the conversation in their state. They’ve been around for years.

But based on what I was hearing last night, you’d think Rev. Barber just fell from the sky like a Martian.

“Wow….who IS that guy? I’ve never heard anybody talk like this!”

And that gets me back to that Dallas Morning News reporter. Because it’s a decade since that story, and the reality is that much of the culture is  still yet unaware that there are progressive voices of faith even out there at all.

Speaking of Dallas, it used to be that progressive churches were few and far between. The old-timers here at Northaven Church recall decades where they felt like they were a progressive “Ark” in a sea of conservative theology.

But, let me use the example of one “progressive” issue: LGBTQ inclusion. In our United Methodist tradition, there is a designation known as “Reconciling Congregations” which indicate congregations that are open and welcoming to LGBTQ people.

When Barack Obama became president, there were only two in all of Dallas. (The church I serve, Northaven. And St. Stephen UMC in Mesquite)

Eight years later, there are now SEVEN. Seven! There are half a dozen more that are very “open and affirming,” but have never taken the vote.

Now, LGBTQ inclusion is, by no means, the only progressive issue out there. But that little example should serve as a metaphor for the growth of progressive theology and thinking overall. It’s far more embraced that it used to be. And that’s just among United Methodists. This same phenomenon is happening among every mainline denomination in Dallas.

There are many other mainline churches who would never called themselves “progressive,” but who also embrace progressive social views, or theological views on specific social or theological subjects.

Progressive theology is not only apparent in the speech of Rev. Barber, but also in the persons of Hillary Clinton and Tim Kaine themselves.

Hillary Clinton is a United Methodist. If you don’t know much about her faith, here is a great backgrounder that will fill you in. (A shout-out to our friends at Foundry UMC in Washington DC, where Bill and Hillary attended during their first stint in the White House. It’s one of our great Reconciling Congregations today…)

She has described her faith as that “out of which the rest flows.”

She’s cited a famous Wesleyan expression that all of us United Methodists know:

(btw…although this IS Wesleyan, it’s doubtful Wesley said it…)

I relate to that story. I was also raised in a United Methodist home. And a Republican one too. But it was through my faith itself, through delving into it, that I became more and more progressive. My progressivism, such that it is, flows out of my life in Christian faith. I am progressive because of my faith.

So, I identify with Secretary Clinton’s journey of faith.

I also love Tim Kaine’s story. He was shaped by the Catholic Jesuit movement. (The same movement that gave us Pope Francis…) His life was forever changed by a year-long mission trip to Honduras. He describes his faith as his “north star” and the thing that informs every decision that he makes. You can read more about his faith here.

I relate to this too, because as a minister who used to work leading mission trips (Outreach Minister at my former church) I’ve seen how mission trips can change lives. Some of our kids, here at Northaven, have opted for lives of serving others after going on our mission trips to Guatemala.

Kaine and Clinton, from different Christian denominations, share a kind of “social justice” based Christian experience that resonate with my own, and with many Progressive Christians. It’s not something these two just picked up, because it looks good on the campaign trail. It’s a part of who they are and who they have always been.(1)

I share all this, not as an endorsement of Clinton and Kaine, but since this is in the news and the culture conversation today, as a way to get at this issue that a great many progressive people are progressive because of their faith, and not the other way around. Our Christian faith is what drives and compels some of us to our social action in the world.

By the way, one final plea, from this progressive Christian pastor…

Consider joining one, or contributing to one financially. Progressive Christian churches tend to not be megachurches. We need, and value, each and every member/worshiper we can get…

On the subject of patriotism, look no further than the stunning speech of Mr. Khizr Kahn, the father of a war hero in the Afghanistan War. Two things brought tears to my eyes…his hand over his heart, and his waving of his copy of the US Constitution. If you missed his speech, check it out here…

What moved me about Mr. Kahn, is that I’ve had the great good fortune to know hundreds of faithful and patriotic Muslims just like him. People who love their country. People who practice their faith. Here at Northaven, we’re pleased to have broken bread with Muslims, shared with them them in panels and deep-level interfaith conversation. Many years ago, I was a part of a group of Christians and Muslims who built a Habitat for Humanity House together.

I have good and faithful Muslim friends, like Mr. Kahn, and that’s why his speech moved me. And notice the heart of his patriotism: his belief in the Constitution, and especially his belief in “Liberty” and “Equal Protection.” Values progressives respect very deeply.

Please understand, I get that there are many progressives who don’t like religion at all. Any of it. I have many progressive atheists friends who find all religion to be harmful. I love them, and know they love me. We agree to disagree.

Further, I have many progressive friends who find any displays of overt patriotism —even Mr. Kahn’s speech— to be over the top and unnecessary. They are wary of how patriotism can too easily drift into nationalism, and blind subservience to military might. They are wary of the sometimes lethal mix of American patriotism and American religion. I get that too…and based on our nation’s history, it’s also a fair critique.

But as I’ve said already here, some of us within the very broad and inclusive progressive movement are progressive because of our faith. Our faith is the thing which drives our progressivism. It drives us to support many of the same causes secular progressives do. Just out of a different starting-point and compulsion.

But I get the hesitancy, and I’ve experienced it first hand. In 2007, during the primary season, I was invited to give an invocation at a political rally for a Democratic Candidate for president who shall remain nameless. (He didn’t win…) At the reception before the event, I was chatting with some of the gathered guests.

One couple asked me who I was and why I was there. I told them, “I’m giving the invocation for the night. I’m the pray-er for the evening.”

Keep in mind, this was in the midst of two wars, and the feeling that a lethal combination of patriotism and faith had led us astray as a nation was rampant.

In that context, the woman looked me up and down and said, “Oh…I think we’ve had quite enough of that (praying) from this Administration…”

Look, I get that reaction. I’m not in the least offended by it.

Further, none of what I’ve written here is to suggest that Republicans and Independents are not also patriotic and faithful to their own religious practice.

My only point here is to respond to some of the “surprise” today, from those who seem shocked by what they saw at the Democratic Convention this week, as a way of engaging the conversation that is ongoing in our culture about progressivism in general.

(1) In both United Methodism and Roman Catholicism, there are conservative theological traditions too. I do not mean to imply that either “all” United Methodists or Roman Catholics are social progressive. But this is not a blog about those traditions. Nor is any of this to exclude other religions from my commentary about progressivism. I’m only speaking of my own experience as a Progressive Christian.

One thought on “Faithful, Patriotic And Progressive”