This is our first real blog together!

I’m glad you stopped by to read. If you don’t know what I’m talking about, you should probably read this first. It will help you understand whether or not these posts are even aimed at you.

I thought I would start with the easier issues first, and gradually move toward the more challenging. (At least, from your perspective…)

The easiest issue of all to refute in the case against same sex marriage is the concept of the “slippery slope.”

You’ve heard the argument before. You may have even used it in debates, because there’s something about it that seems logical to you.

The argument usually goes something like this, “Well, I understand the idea of gay marriage, but what’s to prevent a Man/Boy marriage, like NAMBLA? And, once you’ve opened the door for this, there’s no telling where it might lead.”

Other variations have gay or lesbian people marrying sheep, goats, chickens, or other animals. Rick Santorum was quite fond of this “logic.”

This is classic “slippery slope” thinking. The reasoning is that some moral position, taken by itself, might even be acceptable. But because it could lead to other, more horrendous things, it must be resisted. 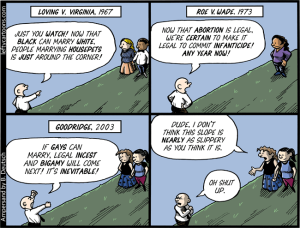 Before pointing out the logic that destroys the slippery slope argument, let me first hurriedly remind you how patently offensive it is in this situation. To even make the case means you have compared gay/lesbian people to pedophiles. (As Russian President Putin clearly does…)

The LGBT people I know are just as revolted by pedophilia as you are, and there is not one shred of evidence connecting pedophilia with gay and lesbian sexual orientation. So, beyond being logically incorrect, it’s also deeply offensive.

So. On to destroy the argument…

The argument crumbles because of one very important word in our legal vocabulary: Consent.

For two adults to be married, they must be able to give their legal consent. A person must be of legal age to be able to “consent” to a marriage. Every wedding you’ve ever attended has contained the moment where the couple “consents” to the marriage together. In the Christian service, it’s called “The Declaration of Intent.”

The basic question is “Are you ready to get married to this person?”
The person answers “I will,” or “I do,” or “I am.”

The bottom line: No consent, no marriage.

Marriage is not possible without two adult human beings who are able to give legal consent.

So, let me state the obvious.

A child cannot give legal consent. (That why you have to fill out a “consent form” when your kid goes on a mission trip…)

A chicken, sheep, or cow cannot give legal consent.

Neither can a tree.

There is no conceivable legal universe in which any of these entities could ever give legal consent.

And yet, I often hear it said, “Well, if we adopt same sex marriage then what’s to stop us from changing “consent?” It could happen.”

What stops it from happening is that “consent” is a legal concept that cuts across all the various kinds of law: Criminal, Civil, Family, Corporate….you name it.

Pick a type of law, and you’ll find the concept of consent well defined and established.

The idea that it could change in the area of marriage, but not change in these other areas is like believing you could stop gravity inside your house but leave the rest of the planet spinning normally. 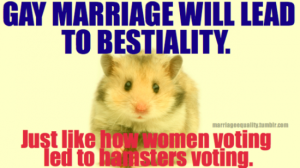 This is why the whole idea of marriage between a “Man/Child” or “Man/Chicken” or “Man/Whatever your offensive item might be” is totally impossible.

It is a legal and verbal non-sequitur.

It makes as much sense as suggesting “Man/Unicorn” marriage.

So, here’s what I ask of you:
a) If you’ve been using this argument yourself, please stop. You are lying about the law. At least, now that I’ve laid this out clearly, you will be lying if you do it again.
b) If you hear others using it, please speak up. Use the moment as a teachable moment about reality of all marriage.

As I’ve said many times, one of the huge problems grappling with the issue of same sex marriage is that the average person does not fully understand what marriage is in the first place. This issue of consent is front and center of those misunderstandings.

The “slippery slope” is the non sequitur of the anti-same-sex marriage argument.

Stop back by soon for another “issue.”

*Of the United Methodist Church

Check out the next entry in this series: “They’re Not Marrying You.”

3 thoughts on “The Non Sequitur of the “Slippery Slope””