I mean that question pretty literally.

Since Tuesday’s election, I’ve heard  “public Christians” –those speaking on TV, radio, the media– talking about the horrible apocalypse that was unleashed Tuesday night, at the re-election of Barack Obama.

For months and months now, in my North Dallas neighborhood, I’ve seen these yardsigns:

The reason is to illustrate that in the culture, there are political folks who believe America needs to be “rescued.”

Alongside of this political rhetoric is a kind of Christian theology. As the head of Heritage Action for America said in a video yesterday, “We are in a war to save America.”

The same message, in it’s secular and theological forms.

And the point to both seems to be that only by electing a candidate like Mitt Romney, and avoiding candidates like Barack Obama, can we truly affect this rescuing and saving.

But, as you know, Romney lost. And, I suppose if this was your theology and politics, then you might feel pretty defeated and down today. But what if there was another way, entirely, to see our calling?

But what if “saving America” isn’t what Jesus has in mind for us to do at all?
What if all Jesus really wants us to LOVE America? All of it?

Because if you look at the “demographics” of this election, you see a very different America. A multi-racial, mulit-ethnic, multi-religious America. An America that embraces equal rights for LGBT people, and wants the poor and middle class to be treated fairly. What if God is calling Christians to love that America? 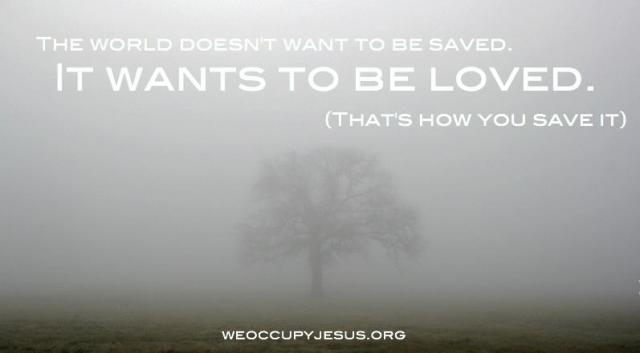 (btw, this pic comes from this awesome site….)

“The word doesn’t want to be saved. It wants to be loved. (That’s how you save it)”

You see, this is a fundamentally different way of framing our Christian calling than you hear from many “Christians” in our world today. I believe it’s right. I believe our job is not to “save” the world. (That’s God’s job) Our job, following after God’s example, is to love the world:

Any saving of the world begins with acts of love. Loving the world is what God does. Sending God’s Son INTO the world. (Get ready: Christmas is coming!)

Loving the world is what God calls us to do.

That means meeting the world where the world is, not trying to change the world to fit our view. This last sentence is a mistake that Christians have made, time and time again, through history.

And today, we take the moral issues of homosexuality and immigration and assume there is only one God-approved way of seeing these things.

I use the word “we” loosely, of course. Progressive Christians, such as myself would beg to differ. I have found a deep grace and passionate calling to advocate for LGBT persons and to stand up for the rights of immigrants. I am not alone. Millions of other Christians see it the same.

I don’t seek to change LGBT persons. I seek to love them, and be in relationship with them. In fact, I assume that gay people will remain gay people, because that’s how God made them. I assume that many immigrants I meet may well be “illegal,” but that this is simply a description of status, not their innate personhood.

This calling comes from Jesus’ original call to minister to the outcast and the marginalized. We see the social change that is coming on these issues not as  the moral decay of America, but as the continuing work of God’s Holy Spirit. In as literal a way as you can when talking about “the spirit,” we see these movements (Immigration and LGBT issues) as movements of God’s Holy Spirit, renewing our land and people.

I have said before: these two groups are the spiritual scapegoats of our time. There are no two groups more maligned, more outcast, more scapegoated than LGBT persons and immigrants. To me, this means God is calling us to give them special attention.

God is calling us to love and embrace them, unconditionally, as brothers and sisters….as good children of God.
No ifs, ands, or buts about it.
No “well, only if they change.”

Exit polls show that Latinos(as) voted for Obama by 70 percent. Not all, but large majorities of Latinos(as) favor immigration reform. They favor a path to citizenship. Above all, they favor eliminating discriminatory laws that cause law abiding US citizens to feel constantly under suspicion. (RE: Arizona).

What would it mean if Christians stopped seeing immigrants as “law breakers,” and just started loving them?

What would it meant if Christians stopped seeing LGBT persons as immoral, and simply started loving them?

Some of us have already made the leap. At the church I am honored to serve, gay and straight families worship, study, and pray together. Our straight folks and our gay folks want it that way. Because we are all part of God’s family. Because being gay doesn’t make one especially loved, or especially condemned, by God. It’s just a way God made gay people. God made them gay, not “good” or “bad.”

And it’s caused us to passionately support immigrants. We’ve been a proud founding “Covenant Church” with Christ’s Foundry UMC, a mostly immigrant congregation very near us. Many of our members see a direct connection between accepting God’s love for LGBT persons, and reaching out with that love to immigrants at Christ’s Foundry too.

As we do, we realize that immigrants are also our brothers and sisters, not our enemies, or some force that is destroying America. It is from loving them, that God saves us.

Interestingly, the founder of our movement, John Wesley, realized the futility of “saving” folks early in his ministry. Wesley came to America to be a minister to the Native Americans.

Wesley was a colossal failure at converting Indians, and he eventually chose to go back to England, because there was:

“no possibility as yet of instructing the Indians; neither had I, as yet, found or heard of any Indians on the continent of America who had the least desire of being instructed.”

He goes back to England, feeling like a failure at saving others.
He has a heart-warming experience at Aldersgate.
And he sets out on a new mission: to love and serve the poor and the outcast of England, and to preach where ever he can.

Wesley begins preaching among the poor, working class folks of England, and finds that in loving them…serving them….he is able to offer a saving grace like never before.

It’s not that he stopped hoping to “save” others. But it’s clear he sees that now sees “saving,” however it happens, as God’s job, not his. His is to just LOVE the people.

What if we could get back to that example of Wesley, that call of Christ, today?

What if, after the election, we Christians, all of us, could look around with joy and say: “This IS a new America.”

It’s filled with a beautiful diverse coalition of people of differing races.
People of differing views on social/moral issues, like homosexuality.
Younger people who feel the church is totally irrelevant.
Women, who desire to be treated with respect and dignity.

What if we Christians stopped trying to “covert” them, or “change” them, or “save” them?
What if we just started loving them?

You see, that’s riskier, because in the end it’s likely to not only change them, but also change us. Each of us know this from our experience with our families.

When we love somebody, it changes not only how we see them, but also how we see ourselves. It’s not just that they are saved. We are saved/changed too. And while that can be scary, it can also be a God-thing. Trust me.

One thought on “What If Christians Stopped ‘Saving’ America, and Started Loving It?”