This was something I once heard my father-in-law say.

It was decades ago, now. Richard Garcia Sr. was surrounded by family. It was a Christmas morning when Maria was probably three or four. We are in the living room of his house in Irving, and the scene was classic Christmas-morning chaos. A half dozen kids, scrumming across the floor on their knees, tearing through the wrappings on Christmas presents, chattering excitedly. A half dozen bleary-eyed adults, sitting in chairs behind them.

There were lots of voices in the room, people cross-talking on top of each other. I happened to be sitting right next to Richard.

One of the kids (I can’t remember who) had blurted out a beautiful kid-like wish.

“I wish EVERY day was Christmas day,” they said.

And Richard, in a voice so small I am confident nobody else in the room heard him but me, replied:

The reason Richard whispered this little line, in the midst of that chaotic scene is because he understood that every day WAS a gift. And he lived those years with as much zest and gusto as he possible could, for as long as he possibly could.

You see, by that moment, he’d already survived four heart attacks and three strokes, dating back to the mid 1980s.

I am not kidding or exaggerating the total number here, although, the timing my be off in my memory. He would have at least one more after this moment.

Richard’s cardiologist regularly used tell him, “You shouldn’t be here.”

Richard was the energizer bunny of heart attacks….he just kept going and going.
Or, as Dennise says, “The Timex watch…he takes a licking and keeps on ticking…”

Which is a part of what caught us all by surprise this time, when his heart finally stopped beating for good on Thursday afternoon. (I’ll post the obit and service info in the comment section…)

Richard was born on Payne Street, in the heart of Dallas’ old Little Mexico. He lived there as a child, and has also lived in West Dallas and Irving. He was “Dallas,” through and through, and I used to love to hear him talk about stories from that old part of Dallas, and the sheer history of it. 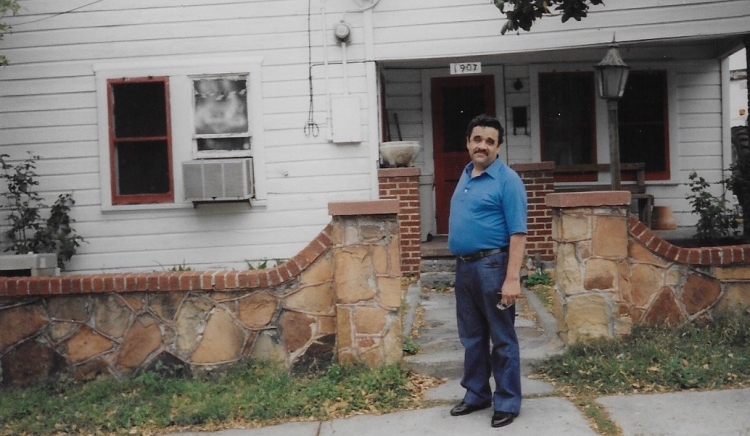 BTW…That old house on Payne Street? It was literally one of the last surviving houses in Old Little Mexico, which is now been appropriated into “Uptown.” That house survived for years, just like Richard. We used to drive by it all the time and marvel how it was still standing. But, it must have been knocked down within the past month or so. Dennise and I rode past the spot last Sunday, one the way to brunch with some friends, and noted that the house had finally been cleared…no doubt to soon become yet another blue-glass high rise.

I think it means that life was always bringing Richard pain, but that he was always finding ways to turn that pain into joy. That was one of his gifts.

From what I have come to know, Richard had two lives. One pre-heart attacks, and one post.
I only knew him “post.”

I hear that pre-heart attacks Richard was outgoing, gregarious, full of life and energy…full of passion…and sometimes prone to anger. He and Dennise, shall we say, had issues when she was younger. Some pretty tough years.

But one of the beauties of time, as they say, is that sometimes it really does heal all wounds, at least for those who allow healing to happen.

Because in the years that *I* knew Richard Garcia, there was never a Father more proud of his daughter than he was toward Dennise. He never met a stranger that he wouldn’t stop to brag about how his daughter was a judge. When he could walk, during her first few elections, he walked West Dallas and Irving putting up signs for her. 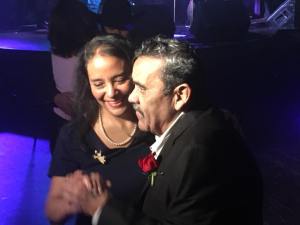 Richard loved to dance. He loved to travel. In recent years, we remember a trip to San Antonio where he went with the two of us, and where he weepily sang along with the Mariachis as we ate our combination plates. And, he managed to sneak off for a trip to Mexico, just six months ago, without telling his kids.

That didn’t go over well, needless to say…but it showed that zest for experiencing life “turned up to eleven.”

I have said, to anyone who asks, that I’ve learned a lot about life from Richard, and a lot of about life from now being a member of the Garcia family by marriage for two and a half decades. As I’ve said many times, it fundamentally changes your world view —as a CIS gender White man— to hear the painful stories of those who are now your family. It makes you look at all POCs you see on the street with different eyes.

“That old man, pushing his Helados cart down the street…that could be my Tio…”

Sometimes, we talk about it and laugh…given that Dennise has sixteen aunts and uncles on both sides —and that we stopped counting first-cousins at one hundred— it *literally could* be a relative.

The point is, it changes the way you see *everyone* in a way that is such a blessing to me that I can hardly describe it.

The stories I learned from Richard are not always joyful. But, the *lessons* of those stories were always how he managed to turn those stories into joy and laughter.

For example, the story of how, as a child, Richard was locked in a closet, at his Dallas elementary school…as punishment for speaking Spanish. Ironically, it led him to NOT teach his own children how to speak Spanish.

Or the story of how, as a young man walking home from his job late one night, he was picked up by the police for simply walking down the street.

It makes you believe and understand the similar stories from our own time.

Or, the meta-narrative of his work and career…what happened to him after he started having all those heart attacks.

Richard lost his job, and could not longer work as a spot welder at the plant in West Dallas. That event clearly changed the trajectory of the family, in ways that were quite challenging. It causes you to realize just how important meaningful work is to everyone, and how devastating the loss of a paycheck can be to a family. 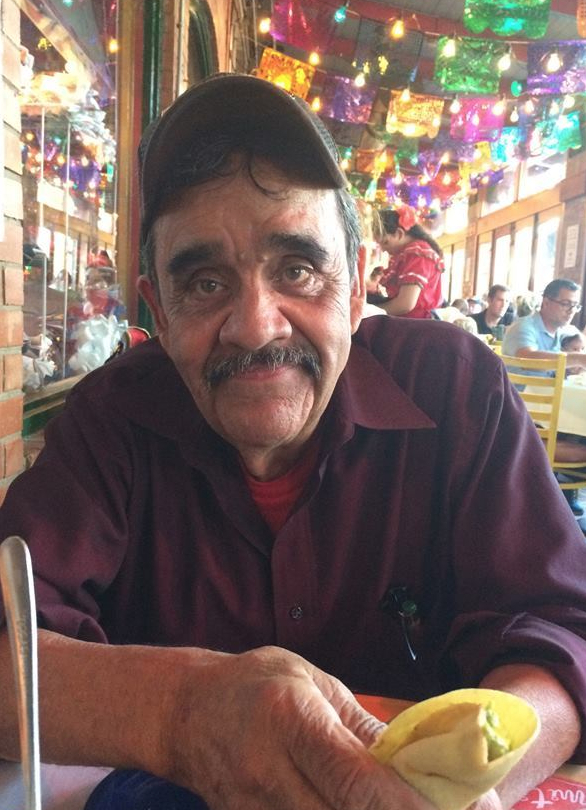 In the face of losing his job, Richard began to mow lawns for a living. He mowed a lot of lawns in Preston Hollow. He mowed lawns, literally, a few blocks from the house where I grew up. He enlisted the kids to mow with him on Saturdays.

Dennise and I talk about this too, now and then.

Did I ever ride past them on a Saturday, to buy baseball cards at 7-11?
While they were sweating profusely for hours?
Me on my Schwinn Stingray, they emptying grass bags?
Me, playing fungo at Preston Hollow Park, they fending off harassment from INS agents who asked them for their papers?

It literally could have happened, and it makes you pause in a deep soul way.

No doubt, this was a tough time for all of them. But I am constantly inspired by how all the kids —Dennise, Norma, and Richard— recall this time with their Dad with a kind of fondness. It’s like their “war stories.” And it reminds you that sometimes the hardest times in life we look back on as some of the best…or at least the ones that show us what we’re really made of.

And the Garcias were most definitely survivors who moved through challenge after challenge with grace and humor, because Richard taught them how to turn pain into joy.

Richard loved to brag about his many grandchildren, including Maria. He even came to some of her high school football games when she was a cheerleader, on cold Friday nights, when he had no business being out that late, or climbing the stadium stairs at Eagle-Mustang Stadium.

And that gets me back to the comment he made on that Christmas morning. Because that comment was indicative of of the the things that gave him the most joy these past few decades…marveling in the growth and joy of his own family….

Watching Dennise become a Judge.
Seeing his children marry, and his grandchildren be born.
Watching some of *them* get married, or go to college.
Being able to hold, and play with, GREAT-grandchildren.
Celebrating more than 50-years with the love of his life, Mary.
Moving through the devastating heartbreak of her death.
Finding joy and love again with Juanita in these last few years.

Friends, ALL OF THAT happened after that time when his cardiologist told him, “You shouldn’t be here…”

And, for me, I have to remember again just how foolish most of the worries are, that I carry inside me. I have to remember just how much privilege I still am afforded, simply by being alive and breathing. And yet, how often I still whine and and complain about minor “injustices” in my life, instead of, as Richard did, soaking it all in with humor and grace, and turning pain into joy.

Dear God, may I…may we… all learn that deep truth Richard Garcia taught me on that chaotic Christmas morning, years ago…