What a rich, emotional day.
Did and “down and back” trip to Georgetown today, for the memorial service of Thom Elliott.  As I wrote a few weeks ago when Thom died, he was my supervising pastor for my Perkins Internship, and one of *the* most formative ministers in my life. And, in a deeply personal way, it’s SO rich…in this time of ministry transition for me…to be remembering Thom and remembering all our mutual friends, the connection we share.
The first thing that surprised me —but probably should not have— was how many friends I saw there at the service. I know it may seem weird to post all these selfies with people…taken at a funeral….but many of these folks are people I haven’t seen for many years. I see some here on FB, but many I never connect with. (Sadly, although we even had lunch together, I failed to snap a pic with Sid…). Mark Porterfield…John Feagins…Sheldon Ray Johnson… Roberto L. Gómez (and early spiritual advisor…), RMN pastors I’ve gotten to know more recently…Sid Hall and John Robert Elford. Bill Frisbie was not there…but his name was invoked on multiple occasions. 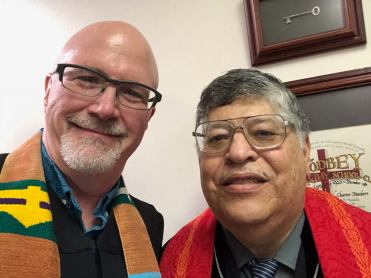 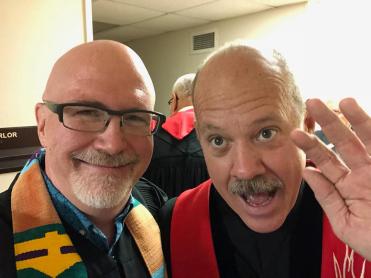 I alluded to this earlier, but I’ll say it again. If you believe in Quantum Physics and alternate universes, there’s a place somewhere in space/time where I have lived out my whole ministry in the Rio Texas Conference. It’s a story I’m not sure I told before, but it’s kinda amazing…
The truth is, it’s where I *thought* I was gonna end up. Like most UT grads, the fantasy of returning to Austin and the Hill Country haunts you the rest of your life. They were pretty heavily recruiting me to come down there….taking me to dinner every year at Perkins’ Ministers Week. (Bill Henderson was big in this effort…) Two of my best seminary friends, Bill and Mark (who were both eventually in our wedding, btw….) were gonna be serving in that conference. So, it was very attractive.
But then, out of the blue, my DS in Dallas called with the amazing offer to go to Highland Park as an associate…doing singles and college ministry. Campus Ministry was my first ministry love, so I jumped at the chance.
Quite literally 24-hours later, the DS from San Antonio called and said “We’ve got a place for you…”
I told him I had literally just committed to go to HP and that, I didn’t even want to know what the offer was. To this day, I’ve never known what they were offering. Still don’t want to. (Well, maybe a little…)
I’d made my choice, and I’ve never looked back.
I mean, that choice led to dating/marrying Dennise, having The Divine Miss M as a daughter…serving the great folks of HP and Northaven…living in this amazing house….with these thousands of musical, political, social activist and personal friends.
I ended up in the right place.
But that alternate universe is out there somewhere. And I think about it now and then.
Today was like a “thin place” where I could *feel* it again.
Thom Elliott was a part of this whole movement to potentially get me to the SWT Conference (Now, Rio).
The choice of Mason, Texas for internship —a small ranching town at the top of the Texas Hill Country— accomplished several things.
First, there was a tactical reason: to meet more folks in that conference.
But also, I intentionally wanted to be somewhere “different.” Somewhere that was not like my city-life in Dallas and Austin. I was a citified suburban guy, and I knew I needed a different experience. So, the quiet, stoic German ranchers tolerated me…welcomed me. And even if they occasionally laughed at me behind my back, we came to love each other. I LOVED them.
Sometimes, it was like being in Mars, so different it was from the city. And I cried when I left. Because I knew I might never live in a place like that again. I realized as I left that one of the great choices/divides in our nation is the choice to be a city person or a country person.
Like trying to dabble in more than one religion, it’s really hard to do both well.
(Btw, trying to both is why everybody —even those who live there— makes fun of the suburbs. As David Wilcox sings, the suburbs are “nothing of either…and too much of each”…but, I digress)
The rural and urban lives certainly have become the two great secular-religions “teams” of modern American life. And the point is, I could see that divide clearly, as I drove away after my year there. 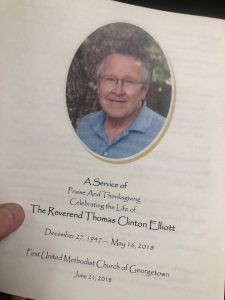 Thom was a dream of a supervisor. As I said a few weeks back, he gave me broad latitude to make mistakes. To try things on my own. He gave me hours and hours of his time, supervising and helping shape me. When we would meet for supervisory sessions, he was always careful to listen and leave long pauses. He was short on advice, more prone to helping lead me to my own insights. Although, when he had advice, it was always timely and wise.
Before Thom, I supposed I was not fully aware that a minister could be effective, pastoral, and serious on the one hand…and wickedly funny, sarcastic and open-hearted on the other.
Thom, through his own vulnerability, showed me how to live that way…how to live from my values….how to tolerate the inevitable arrows of the critics…and how to engage in healthy self-care.
He was one of the deepest spiritual rivers I ever knew…he could quote the desert fathers and write unbelievable prayers (see the picture of one below…).
And…he could also be fidgety and nervous…overly anxious and maybe even a little paranoid.
Therefore, at various times, he could lead you into deeply quiet, spiritual peaces…and at others moments, pull you in to his own nervous energy.
But, here’s the thing: he let me SEE all that. He didn’t hide it. He showed it, warts and all.
He let me tag along with his family at the time….Kathy, Debbie, little baby Erik (who I remet today)….and I got to see how a clergy family can interact.
And all the while, the combination of being that holy vessel for others, and being wholly human, vulnerable, and frail….my God…what a gift to me.
He SHOWED me how you go about being a pastor.
BTW…I told him this many times. That is, I told him how much he meant to me. And for this, I am grateful. Because I’m a bit sad I didn’t talk to him at the very end. But I truly believe we’d said all we needed to say, and knew how strong our connection still was.
So, this morning, I drove down I-35 to Georgetown. The exact same path you use to get to Mason from Dallas. Except instead of turning West out to the hills…I turned East…the few blocks to FUMC Georgetown.
What a blessing that Thom’s retirement led him to Georgetown. Because the Gulf Coast (where he served for so long after Mason) was not a place I got to very often. I know he was grateful for his friends there.
And it meant that if I was headed to SA or Austin…or in many cases, on my way back from Kerrville Folk Festival…I would stop in on Thom these last few years on my way home. What a blessing to connected with him again.
And what a blessing to reconnect with all these clergy friends.
Bishop Schnase said today that “Thom was a connector.”
I think what he really was was the best of our tired Methodist expression “the connection.”
I’ve always believe in the connection. Not the formal one, so much as the informal ones. (Reminder: that why we used it for the name of the band…)
Connection at its best is not based on heiararchy or position, or requirement. It’s based on trust, friendship, experience, vulnerability. These things come in “connection” that is not required, but that we drink up, sometimes like we’re dying of thirst. (Because we often are…) It cannot be demanded so much as it can be earned through trust and experience.
“Connection” is old friends, seen years later, and the strange joy of remembering the blessed friend that connected us all together.
God bless you, Thom. And, as I told you many times, thank you for everything.