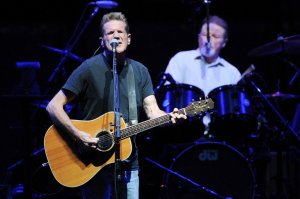 Been away from home all day and now that I’m home, I’m feeling the full weight of Glenn Frey’s passing.

So strange to come home, open up the computer, and see that the Wikipedia entry already says “Glenn Frey was an American singer, songwriter…”

Can’t they give us a few days before they change that?

This one is gonna take some time for me to really accept.

I was a child of the 70s. We’ve become used to icons from the 50s and 60s dying. That happens all the time. But, I am sorry, but sixty-seven is waaay too young. And not just because it’s only a fifteen or so years from my generation.

I’m feeling so heartbroken for Don Henley. The two of them were like a Lennon/McCartney for those of us who grew up in the 70s. Some of you are groaning and assuming I’ve just lost all credibility at that last statement. I don’t care. They were. And the facts of their hit songs bear out such comparisons. Look it up.

I’ve said for years that the singer-songwriters of the 1970s form the heart of my musical DNA. Folks like James Taylor, Carole King, Cat Stevens, Jackson Browne…

And, yes, of course Henley and Frey. They were songwriters first, who just happened to be in an incredibly successful band.

One of the real joys of watching “The History of the Eagles” last year, was the segment where Frey talked about this very thing….about how they took writing seriously….about how early on he lived in the same small apartment building with Jackson Browne and learned some of songwriting from him….listening to him play/sing a phrase over and over through the walls.

Eagles songs are story songs…. “New Kid in Town”….”Lying Eyes”….”Hotel California”….they paint pictures with the words and music. They’re memorable songs, and they work their way into your heart and life.

As some of you know, Connections does an Eagles-cover show, now and then. My own observation is that folks might dance and move more to other artists. But they sing along more to the Eagles songs than almost any of the dozens of artists we’ve covered. The songs are deep in the hearts of millions of us.

Even as I kid, I got that this song was about something more…some deeper social commentary…even before I fully understood what was happening in the adult culture of the time.

But the song that really spoke to me on that record was “The Last Resort.”

I’d put on “Side B” of the album, and fall to sleep listening to this song. It’s such an amazing anthem. And such a commentary about the worst of who we are, as Americans. It was one of the first times I realized songs could be BIG….could have big and important themes…lyrically and musically….and socially relevant themes that spoke to something deeper.

As a team, Henley and Frey excelled at giving us those kinds of songs. And that’s why they’ve lasted so long. That’s why thousands of artists have come and gone since they first hit the scene…but they remained.

Except for a few notable exceptions….Dan Fogelberg, Harry Chapin…most of the folks from that generation are still around. Which makes Frey’s loss all the more heartbreaking.

Thank you, Glenn Frey, for all the incredible songs. For so many songs that are a soundtrack to our lives. We’re heartbroken for you and your family, for the Eagles, and for all of us. But I am so deeply grateful for your craft, for how it stays with us, and for how it always will for many of us.

And tonight, I’m remembering Laurie Anderson’s tribute to Lou Reed at the Rock and Roll Hall induction this past year. She quoted a spiritual saying I’d heard before:

For songwriters, it seems to me we must change the third time to “when your songs are played for the last time.”

By that measure, Glenn Frey will be with us for a long, long time.