So, this just happened… 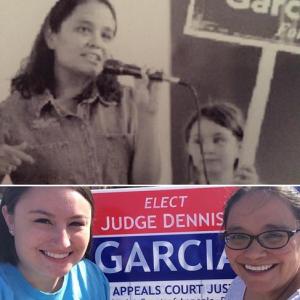 Dennise just posted this to Instagram. It’s quite a “moment in time,” what just happened.

Maria can barely remember a time in her life when she hasn’t been campaigning for her Mom. As you can see in the top pic, that yard sign she’s holding was almost bigger than her, the first time her Mom ran for judge. That top picture is from a Labor Day weekend picnic, 2004, the very first time Dennise ran and won. The sign says “Dennise Garcia for Judge.”

My wife, Judge Dennise Garcia, is running for the 5th Circuit of the Texas Court of Appeals. As before, it’s a race few Democrats have won in recent years. As before, it’s a seat where there is no long-tenured incumbent. I’m pleased to tell you, btw, that she and her opponent are “tied” in the Texas State Bar Poll. That certainly says something.

What’s different, of course, is that The Divine Miss M is no longer a little six-year-old. And Dennise has now served on the family court bench for twelve years. And its fair to say that over that tenure, she’s one of the most well-respected judges in the area. And, one of the longest current tenured judges in the county.

What’s also different this time is that The Divine Miss M can vote. For her Mom. And, as you see, in the bottom pic, she that just now. The poll workers clapped for her, as a first-time voter.

All this is to also remind you, as well, that polls are now open for early voting in Dallas County. The primary election-day is coming up. Dennise has no primary opponent, but be sure and look for her name on the ballot. And thanks in advance for your support.

Not sure if those poll workers actually got that there was a whole other layer of emotion and personal milestone in that “first-voting” moment just now.

Not many kids get to vote for their Mom. Ever.

3 thoughts on “Our Little Campaigner”