All week, I’ve had the old Jesus Jones song running through my brain:

Last Sunday in church, we recognized George and Jack as the first legally married same sex couple in Dallas. They got a long ovation. That would have been historic enough.

But then, I invited all the other same sex couples who have been legally married over the years –or who will be soon– to also come down to the front. As you can see, it’s a beautiful group of folks. (And we had several other families who were out of town for summer). 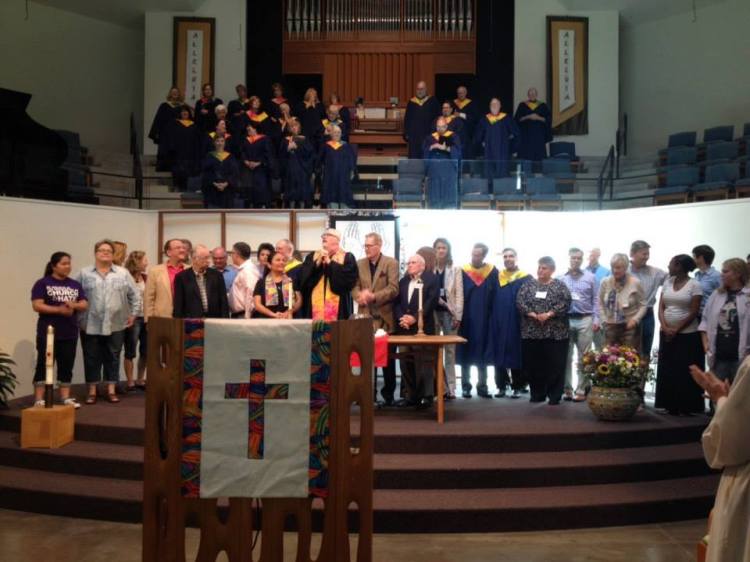 The moment in this picture is when it all became real to me. It wasn’t just about George and Jack. It wasn’t a publicity stunt. It wasn’t just some disembodied movement for “human rights.” It was suddenly about the Civil Rights of a specific group of people I love very much: some of the good people of Northaven Church and their loving, beautiful families. (Listen to audio of this moment here)

George said it best, moments after they were married last Friday…

Right after their wedding, George and Jack took off their glasses and wiped their eyes. It was an historic and beautiful moment.

The first same sex marriage in Dallas County. A couple together 54 years. Onlookers crowded the courtroom gallery….mostly also couples who’d soon be married that day too.

In the midst of it all, the media asked George and Jack, “How do you feel?”

I believe they said something about it being surreal. I’m pretty sure they confessed as to how they were never sure they’d live to see the day.

But then, George looked up and said this…

When any American gains Civil Rights under the law –no matter who they are, or whether or not we agree with those rights– Everybody Wins. The arc of justice bends into a wider circle. Our Union is more perfect, and everyone is a little more free.

This is an important point not to miss on the 4th of July.

One of the big hashtags immediately following the ruling was “#LoveWins.” In fact, there’s even a big People Magazine picture of George and Jack this week, with that expression as the headline.

So it might surprise you to hear I’ve tried to avoid using it. Because “Love Wins,” implies, by definition, that somebody has lost. I understand that the idea is that love wins, so everybody wins.

But we are forever playing games of “winning and losing,” especially in the political arena. We are forever pretending that rights are a kind of scare resource and zero sum game. As such, we are forever pitting ouselves against each other and drawing circles of inclusion and exclusion.

Perhaps we’re compelled to this by something deep in our genetic code, latent from some tribal period? Who knows?

On this issue, the false binaries are drawn as follows:

The media certainly makes big money framing the debate like this. Politicians whip up their base with that kind of rhetoric. I’m well aware there are those who believe I have contributed to this binary way of seeing and acting.

But in a very real way I believe these binaries are red herrings and falsely stated. The truth is far more beautiful, and far more inclusive of us all.

So, on this day we celebrate freedom, the message is very clear…

George was right. Everybody wins.

Happy 4th of July, everybody.

Whether you know it or not, you are a little more free today than you were last week.

And that’s a good, good thing.