I wrote you earlier this year about much the same thing I will say today. And, in truth, I’m not really speaking to all American Christians. Just those who believe they are being persecuted for their faith. Primarily, White Evangelical Protestants.

A poll in 2014 show that you, White Evangelical Protestants, believe you are more persecuted than Blacks, Hispanics, Muslims, Atheists, or Jews. In recent days, media has been aflame with right-wing pastors and politicians, proclaiming the end of the world because of same sex marriage.

Let’s be very clear about a few things. Your faith is absolutely not at stake, and you are not experiencing real persecution of any kind. We Christians are absolutely as free to exercise our faith as we ever have been. We can go to church without fear of being hunted down for doing that. We can pray with our families. Our churches can create clinics, and schools, and non-profits that serve God and the world. And nobody is going to impinge that right in any real way.

Well. There are a few exceptions to the previous, actually. African American Christians are in clear danger, and are being persecuted and scapegoated in our culture. Nine were martyred while attending a recent church Bible study.

Unlike the fictional, media-created-flames of Christian persecution rhetoric, actual African-American churches are actually in actual flames right now. A half dozen have burned to the ground in the past week….a number that surpasses mathematical coincidence.

Meanwhile, in other the parts of the culture, Gay and Lesbian Christian are being denied the right (and rite) of marriage, even legal Civil Marriage, in some places. Even though Civil Marriage is now a Civil Right. And lest you think that’s all fiction, in a Tennessee store this week, this sign appeared: 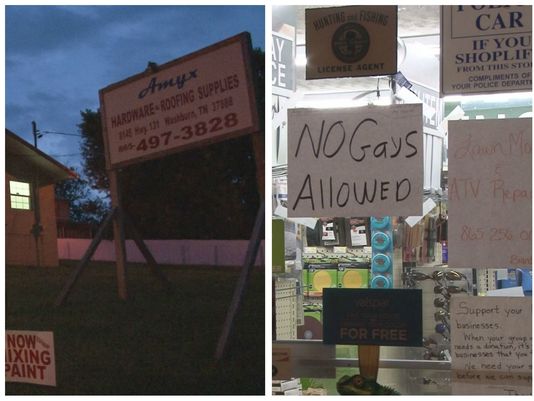 Or, witness the hate mail to Rev. Gilbert McBride, who performs same sex weddings, and was recently sent a note, which said this:

“As you may or may not have noticed is when your wife died, no one came and brought meals or even so much as condolences. That’s because as a minister that performs gay weddings, you deserve all the bad that you brought upon yourself…Do this town and your family a favor and get a rope and hang yourself. People like you disgust us. We don’t want or need your kind around us making our town look worse. I personally hope you die a slow and ugly death. Maybe you can catch aids from your friends. Just die.”

I am not trying to compare the vast, historical and current sufferings of African-Americans with LGBT Christians/Allies. Clearly, those experiences are different, and comparisons are not helpful in many ways. But I am saying, their experiences intersect in that both groups experience very real persecution/exclusion in our society today. While, on the main, you are not.

You can go to church without fear of being shot. Think about that. Because, every day, African-American Christians have to wonder if they can. They have to worry. Our Muslim friends worry every day if somebody is going to attack their Mosques, or scream at them on a street corner.

Yes, you are now being asked to respect the Civil Marriage Rights of gay and lesbian people. That is absolutely true. Especially government workers who are sworn to uphold the Constitution.

Many of you believe same sex marriage is against the Bible. In responding to this, then, I would remind you what Rev. Bob Jones wrote in the 1960s, in and around the time of the “Loving” decision:

“Wherever we have the races mixed up in large numbers, we have trouble….These religious liberals are the worst infidels in many ways in the country; and some of them are filling pulpits down South. They do not believe the Bible any longer; so it does not do any good to quote it to them. They have gone over to modernism, and they are leading the white people astray at the same time; and they are leading colored Christians astray. But every good, substantial, Bible-believing, intelligent orthodox Christian can read what the Word of God and know that what is happening in the South now is not of God.”

The same claim to “orthodox” Christianity is made here in the 1960s to defend segregation (in the name of God) is often used by evangelicals today, as they deny full participation to gays and lesbians (in the “name of God”), and to drive their sense of “persecution” and “offense.”

(Many thanks to Rachel Held Evans for the incredible blog that lifts out this quote from Bob Jones, and many others….)

Scholars have done research on the “persecution complex” that you often feel. Conservative scholars, that perhaps you can hear from more than you can hear this message from me. Check it out here.

It’s just not under attack for any reason whatsoever.

So, stop with the being offended. Our mutual Christian calling —you and I— is to trust that if there ever was any scapegoat at all, it was Jesus and not us. And if we really believe Jesus, then we must really believe that his “scapegoating” (sacrifice) was sufficient, permanent, and efficacious. And as the Bible says, if there is sorting out of people to do in the end, that’s God’s work, not ours.

Please, dear American Christians, take a breath. Say a prayer. Allow the Holy Spirit to take you inside of your body, and to teach you the Good News of your personal safety and security.

And then, allow that same Spirit to help you reach out in love to all God’s Children.