Now and then, baseball stories like “The Natural” actually happen for real. But when they do, they don’t look like Robert Redford. They look like Guilder Rodriguez.
Guilder Rodriguez is the feel-good baseball story of the year. Maybe the feel-good story of the year, period. As a Rangers’ fan, it made me proud of the entire organization. As a human being, it might just make you cry. 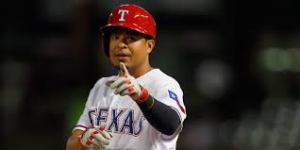 Guilder Rodriguez got his first major league hit on Monday night. Dozens of guys do that every year, right? No big deal. While any first MLB hit would be a big deal, even for a 19-year-old kid, you must first understand that Guilder Rodriguez is not nineteen. He’s 31-years-old. In baseball years, that’s like being fifty. A few years away from where any sane human being has long retired from the game.

That all changed Monday night. With the score tied at zero, no outs, in the bottom of the third, Gilder Rodriguez was at bat with a 1-2 count when this happened:

Guilder’s father —who had not seen him play a game since 2004— happened to be in the stands with Guilder’s wife. He cried. His wife cried. Guilder cried. And the entire crowd stood to their feet, and gave Guilder Rodriguez a standing ovation.

He told ESPN-Dallas, “This is one of the best moments of my life…My first big league hit, my first RBI, my father in the stands, my wife. This is my second-best moment, after my two daughters were born.”

Most players never play that long in the minor leagues without being called up or quitting. The hot prospects sail through the farm system and make Majors quickly. Others give the minors a few year’s try before moving on to do something else in life. Very few players ever stick around the minors for 1,085 games.

In all, there are 245 minor league teams affiliated with the Major Leagues. That means thousands of players each year, vying for those few sacred spots in the Big Show. Only one in 1,000 players will ever make it into the Major Leagues. Given these odds, it’s not surprising that the average pro career, at any level, is usually about five years.

That means, in baseball terms, if you haven’t made it to The Big Show by twenty-four, you’re usually considered an old man, and it’s pretty unlikely you’ll ever get there.

Guilder Rodriguez, to repeat, is thirty-one-years-old. He’d played in 1,085 minor league games, and for thirteen seasons. Let that soak in.

What a story. What perseverance. And to finally achieve that dream…with his father watching…who hadn’t seen him play for ten years? Are you kidding me?

And it reminds me of a another great baseball story, albeit a fictional one (mostly). The story of “Doc Graham.”

Doc is a character in the classic baseball film, “Field of Dreams.” (1) Long ago, he’d been a minor leaguer himself. But he gives up that dream to get married, raise a family, and become the small-town doctor for thousands of people.

But Doc Graham meets his own destiny at the “Field of Dreams” and gets the chance to re-live life as a young, hot prospect. He plays among all the greats, who have come there to Iowa, to that mythical ball field.

But when Ray Kinsella’s daughter falls, and is suddenly in need of medical attention, the young-ballpayer Archie Graham confronts his own moment of truth:

Very soon, Guilder’s pro career will finally be over. Like Doc Graham, he will step off that field for the final time. But the crowd at The Ballpark the other night gave him a gift. It’s the same gift “Shoeless Joe” gives to “Doc Graham.” It’s the gift of a single, hopeful, sentence:

The reason baseball is such an amazing game is that it keeps giving us these kinds of stories. Stories of hope, perseverance and faith. Whether we ever play the game, we can identify with the stories too, because we struggle through life, yearning to achieve our dreams.

For days, and weeks, and even years, we can struggle forward and never see our dreams fulfilled. And what we really yearn for, almost all of us, is for somebody to do for us what the crowd did for Guilder; what Shoeless Joe did too.

In the midst of our mostly journeymen lives, we yearn to hear somebody say, “Hey Rookie….you were good.”

Now and then, it happens. And it’s a beautiful thing.

(1) Although, if you want to have fun, you should look up “Archie Graham” in your Baseball Encyclopedia