It’s been quite a jarring week in the news.
Boston.
Ricin Letters to the President.
Kaufman County.
The explosion in West, Texas.
Flooding in the midwest.

The “news cycle” feels unrelenting. As a friend of mine said moments ago: you know it’s bad when they interrupt breaking news to bring you more breaking news.

One of the things I am trying to do more of these days is to intentionally tear myself away from the Internet, the Facebook/Twitter Feed, and Cable News cycle. Sometimes, even while breaking news is happening. (As I am doing in this moment, even as the chase for the Boston bombers is ongoing in the real world…)

I’m still quite plugged-in, don’t get me wrong. But more and more as I can, I am trying to become aware of how fear, anxiety, and stress creep into my body during times like these…and how sometimes their door inside my soul is my own obsession with “the news.”

I remember, for example, the feeling after Oklahoma City (that anniversary is today, btw) or September 11th. I remember the stress-reaction that stayed with me for months. I remember how relentlessly I was glued to the TV for tidbits of news and insight. It stayed with you too, didn’t it? It did for us all.

The relentless 24-hour news cycle wants this too. They also want us glued to our TVs. Their entire survival is contingent upon us….not…looking…away.

Yes, they provide a helpful service. But they also keep us transfixed and emotionally frozen. It’s their job to do so. If we stopped watching, they’d go away, and they know that.
———————————-

Deep inside our DNA, there are fear-reponse-triggers that await stress and traumatic events. Early in human history, people really did have to fear whatever it was that was lurking around every corner…
The animal that might eat them while they slept…
The neighboring village that might attack without provocation…

The adrenal-response that screams “DANGER!” at the first sign of any, got fixed inside our DNA. And, in many ways, that’s good. It’s what has kept our species alive.

It’s not to say we shouldn’t have empathy, sympathy and compassion for those who are victims of terrorists acts like Boston. It IS to say, we must reassure ourselves (not just our children) that we are OK.

So, I urge you: be aware of the fear, anxiety and stress in your body. Something truly fearful will probably one-day happen to you. You don’t need to create those responses from outside events you can’t control, didn’t cause, and aren’t a part of your world. Nobody gets out of life without their own life traumas. Real ones will come to you, you don’t need to seek them through the TV.

A few days ago, I reposted this picture…

I love this picture. Fear IS a liar. Fear lies to us all the time. Fear move us to responses that are totally out of proportion with real threats. Fear causes us to do things we later regret.

A few days back, I asked Facebook friends to post their favorite quotes about fear. I got 41 amazing responses. I’ll post some now, in the hopes that they might be helpful to some of you…

“I must not fear.
Fear is the mind-killer.
Fear is the little-death that brings total obliteration.
I will face my fear.
I will permit it to pass over me and through me.
And when it has gone past I will turn the inner eye to see its path. Where the fear has gone there will be nothing. Only I will remain.”
— Frank Herbert*

“Vivir en miedo, es vivir a media” A life lived in fear is a life half lived.”*

“Fear is exacerbated by the mind running amok, thus any of the Passage Meditation mantra are useful for silencing the mind gone wild … Hard (to remember) to use when most needed but very powerful when used often!”

“Fear is faith that evil will prevail”

“Faith is fear that has said its prayers.”

“Peace requires something far more difficult than revenge or merely turning the other cheek; it requires empathizing with the fears and unmet needs that provide the impetus for people to attack each other. Being aware of those feelings and needs, people lose their desires to attack back because they see the human ignorance leading to those attacks. Instead, their goal becomes providing the empathic connection and education that will enable them to transcend their violence and engage in cooperative relationships.”
— Marshall Rosenberg

“So, first of all, let me assert my firm belief that the only thing we have to fear is fear itself—nameless, unreasoning, unjustified terror which paralyzes needed efforts to convert retreat into advance. In every dark hour of our national life a leadership of frankness and vigor has met with that understanding and support of the people themselves which is essential to victory.”
— Franklin D. Roosevelt, Inaugural Address, March 4, 1933

“Fear is the path to the dark side. Fear leads to anger. Anger leads to hate. Hate leads to suffering.”
— Master Yoda

“Shine the light of compassion on all that frightens you to find healing and freedom.”
— Tara Brach

“In the dark recesses of the mind, a disease known as fear feasts upon the souls who cannot overcome its power.”
— Ramandeep Singh

“From the new movie, “After Earth”; “Fear is not real. Don’t misunderstand. Danger is real, but fear is a choice.””

There were many many others. And, as I often am, I am so blessed to be surrounded by so many wise and sage online friends. 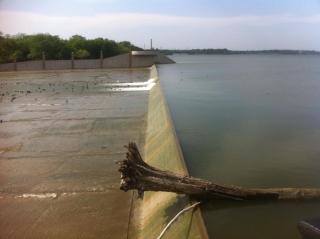 The afternoon of the Boston bombing, I still found time to get away for a short trip around White Rock on my bike. I must say, it was a bit surreal to do this, given that everybody in the world was glued to their TVs. As I got to the spillway, I snapped this shot. And a word came to me: “Remember, in the event of an emergency, put on your own oxygen mask first.”

That silly instruction is given to us by the flight crew on any flight anywhere. And yet it’s deeply true, isn’t it? What they are telling us is far more profound than putting a piece of plastic over your nose. They are speaking to our fear response, and saying: 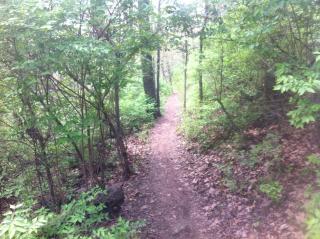 This came to me again on Wednesday night, as I started hearing word of the horrific explosion in West, Texas. I was at Mount Sequoyah, the retreat center in Fayetteville, AR, for a Board of Trustees meeting. And it was surreal. For, while I was taking a late-night walk around Skyline Drive, soaking in the beauty of the trees, the news from home was screaming headlines of horror and death, once again.

By the way, the wind was incredible up there that night. There were storms coming later on. But around midnight? Just an amazing wind in the trees. It was so loud it sounded like a jet engine. I walked around the backside of Skyline Drive, near the watertower, and literally heard the wind howl. Truly awe-inspiring.
———————————-

Look, I understand…the news cycle is awfully grim these days.
So, do yourself some favors…

First, turn off you TV. Finish reading this, and turn off your device. Just sit in silence for a moment.
Can you feel fear in your bones?

If so, that’s not good. That’s adrenaline and energy that is sapping life from you right now. Doctors will tell you that too much stress can lead to heart attacks, stokes, and generally reduce our immune system; making us susceptible to all sorts of disease.

So, scroll back up and read one of those quotes about fear that seems to strike you.
For me, I love the simple, Biblical admonition to, “Fear Not.”

So, fear not. Because fear is a liar.

I don’t know what they are, but I know this: Right now, in ways you need to become aware of, your fears are lying to you.

Become aware of them.

Consider keeping the TV off today. You can learn more about the two terrorists tomorrow…where they were from…what their motivations were, etc, etc…
In fact, trust me. They’ll know more tomorrow morning that you can possible learn even if you watch all day. They’ll know even more the day after that.

Your world won’t end if you wait until then to find out the info. In fact, given what I’ve said about how stress can kill us, your world might end sooner if you spend all day watching and worrying!

The most important work you must do today is to keep the fear from resting permanently inside you, like during those months and years just after September 11th. Find ways to do that NOW.

The world needs (and so do you) your hope, your inner peace, your calm-center far more than you need to watch headline news for one more second this day.