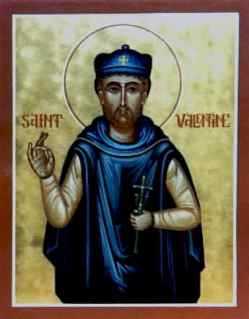 It should be said quite clearly that there’s no definitive history available for the person known as “St. Valentine.” Today is, of course, the day we celebrate in his honor, whoever he was. “Valentine” was, once-upon-a-time, a very popular name for men, since its root word is “Valor.”
Archeologists have, in fact, uncovered a shrine to St. Valentine in the netherlayers of ancient Rome. So, that lends credence to the idea that, whoever he was, he was a real guy.
But here’s something interesting. Among the many St. Valentine legends is one that tells how he secretly married couples who had been forbidden to marry by Emperor Claudius II of Rome.
For this, he was apparently beheaded by the Emperor, but beloved by the Christians of his day.
Sooo… to review….
Defying the marriage law of his day –marrying couples who were in love and desired to be wed but could not under the laws of the state– is how he got remembered with reverence, and eventually becomes a Saint.

Maybe these friends of mine –whom some claim have broken our clergy covenant just by signing this statement– aren’t so heretical after all. Well over 1,000 United Methodist clergy, nationwide, have signed this (or similar) statements, saying that if asked they will perform weddings for gay or lesbian couples.

Lot’s of folks are up in arms about this.

So, it’s worth remembering that many of the revered “saints” of the church became so because they stood up to the conventional wisdom of their time, the “Powers That Be” of their day.

In the long view of history, many we call “heretics” the Church later calls “Saints.”