This week, we’re saying final goodbye’s to Paul Escamilla. For some of us, the goodbyes have been going on for a while now. Paul, as many of you will know, has been a minister here in North Texas for well over 20 years now. He’s also one of the founding members of Connections. 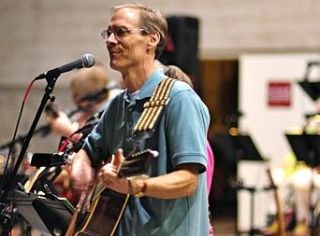 After our North Texas Annual Conference ends tomorrow, Paul and Elizabeth will end a week of nomad-existence, and sojourn to Austin, where he’ll become the senior pastor of St. John’s UMC. (Memo to my many Austin friends: It’d be worth checking out. Just sayin’)

For reasons not worth repeating here, Paul’s been out of local church ministry for a couple of years now, having been working on the staff of Perkins School of Theology most recently. But, truthfully, Paul was built to be a pastor. It’s just in his DNA. In fact, to a person, when somebody I knew heard the news that Paul would be going to St. John’s, they said, “YES! Paul needs to be in the local church.”

Everybody who knows him thinks so.

Paul is a gifted pastor, preacher, and the author of many books. He’s got a passion for leading/planning worship unrivaled among my peers. He’s also a sensitive and caring soul, and has a caring spirit about him.

He has a certain eloquence that can sometime be an acquired taste. Sometimes, while he’s in the midst of a metaphor or analogy, you wonder exactly where he’s going. But the metaphors almost always end up in a very deep place that leaves you thinking “Ah…”

Most of the time, that is. There are times when you still end up scratching your head and thinking “Huh?”

In those moment Paul can remind me vaguely of the Phil Dunphy character on “Modern Family.” (Can I get a witness?)

A few weeks back, Rusty King and me paused to note that Connections probably would have never become what it is today without Paul. What we meant by this is that besides all us “founding members” who banded together to set the vision, we needed an actual “home” for the band…a place to rehearse…a place to try out new shows.

Paul was the one who provided that place when he came to Spring Valley and offered it as a home base. He didn’t have to. It was, no doubt, a risky thing at first. I am sure there were naysayers wondering why Paul offered the space to a group that was not just Spring Valley’s alone. But credit Paul for supporting the band in this way. Without it, we could not have become what we are today. It represents the kind of “connectional” spirit many of us could stand to learn.

BTW, it was Paul who pushed us to use the name “Connections;” which was a name I initially hated, favoring another I won’t even mention here. But Paul was persistent: the name symbolized what the band was about, he said.

And he was absolutely and completely right. (And I have never been more pleased to have been wrong…)

Two weeks ago, we had a “farewell” party with our Connections band members over at our house. Ostensibly, it was to say goodbye; but unbeknownst to Paul, it was also to present him with this guitar… 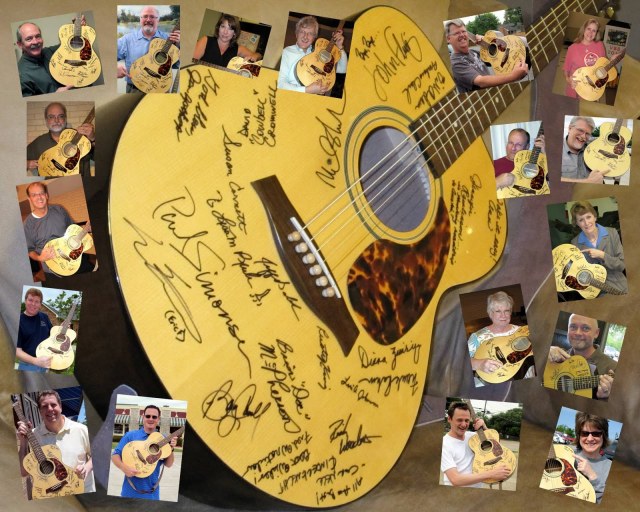 As you can see, each member of our band signed it, and Michael Shehan took pics of each us pointing to our own signatures. He then created this marvelous composite poster that you see above.

We wrote another message on the back too. 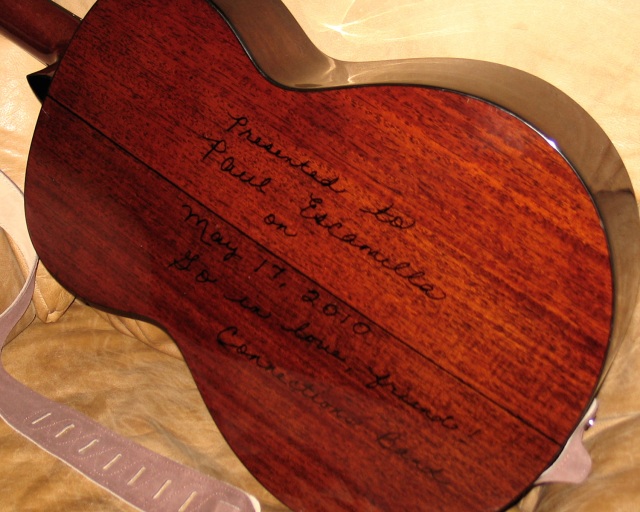 While Paul is known for many goofy, Phil Dunphy-like expressions from the stage –sometimes leaving the rest of us in the band not quite sure what to say next– there is one that really stands out in everybody’s memory.

“Well, you know what they say: ‘Infrastructure is Grace.'”

We all rolled our eyes and giggled.

Finally, maybe months later, Paul explained himself at dinner before another show. He explained that things like Connections could never happens without a certain amount of infrastructure…churches to host the shows…volunteers to set the rooms and bring the desserts…a place to rehearse…a system to collected the funds we raise and disburse them with ease (through the North Texas Conference)

All of this, Paul said, was “infrastructure.” And in many great and small ways, this kind of mundane infrastructure could become a “means of grace” for all of us.

Dang it if he wasn’t completely right. It wasn’t goofy at all.

I missed the last goodbye party for Paul over Memorial Day Weekend, since I was at the yearly tribal gathering of the Kerrville nation. And so I thought I’d missed Paul for good. Not that we’ll never see each other again. But I know how these things work. It’s not my first rodeo.

Turns out, though, he was here this week at Annual Conference. And, even more poignantly, he and I were the two “sponsoring elders” Rodney Whitfield chose to have stand with him as he was ordained tonight.

And so it was that, one last time, Paul and I got to sit right next to each other, during the ordination service that ended about an hour ago now. It was a great service, btw. Paul and I both agree that Bill Lawrence’s sermon might well be the single best ordination sermon we’ve ever heard.

And it was special to get to stand with Rodney. (Who is a fine young minister with a bright future, if I do say so myself).

But what happened during the service is that we were asked at the last minute to serve communion to the folks in the “overflow” room. Turns out, they hadn’t quite thought through who would do this, and needed some folks to go over to the fellowship hall, where a video feed was being beamed in live.

Of course, we said “yes,” and so as dozens of communion servers fanned out across the cavernous sanctuary, we literally headed out the doors, rushing out through a bunch of winding hallways, and even outdoors for a moment, before emerging into the fellowship hall. There, we found several HUNDRED people, seemingly grateful to see us.

It was definitely more than we expected to see. We figured on a few dozen. But people just kept coming and coming. And so Paul, me, Joe and Kay kept serving and serving.

I thought of what a great metaphor that was. It was kind of like what we’ve tried to do with Connections….ie, get outside of the walls of the traditional church, and find the people where they are; and, hopefully, offer a little grace. Really, it’s what we should be doing all the time, in a completely non-metaphorical way. But, I digress…

And then, after everybody else had been served, Paul and I served each other communion one last time. Which was a moment we couldn’t have planned in a million years, of course.

So, now, I’m back at the hotel, writing this down, and giving thanks to God for that moment and for my friend.

And while I definitely cannot say that it’s true all of the time, it is true now and then.

Now and then, infrastructure is grace.

5 thoughts on “Goodbye, Paul (or, "Infrastructure is Grace")”