I can’t believe it’s been more than a month since my last blog. I’m hopelessly behind on “Daily Grats,” mostly because of Easter and stuff happening around the house with construction and the break-in. One of the things that’s currently a bit wiggy is Connections‘ own website.

We had an unbelievable show with Connections this past Friday night. Our biggest crowd ever –estimated by some to be almost 1,000 persons– and another incredible night of fund raising for a great cause. Oh yeah….and another rockin’ show with our incredible band… 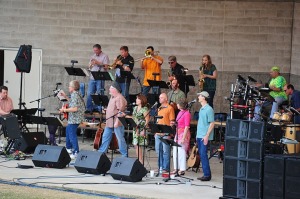 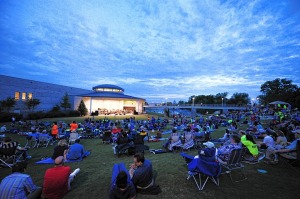 Last Friday was historic for a number of reasons:

— We officially passed the four-year mark (show-wise) in the life of the band.
— We had our biggest crowd EVER.
— We played our first “outdoor” gig, at the lovely Joe Farmer Amphitheater.
— And, last but not least, we passed the $100,000 mark in total funds raised to date.

That’s right. Connections has raised more than $100,000 for UMCOR and Nothing But Nets!!!

So, I’ve done a little updating of our spreadsheets to reflect the most current info. Here’s a bar graph of the funds raised “all time.” 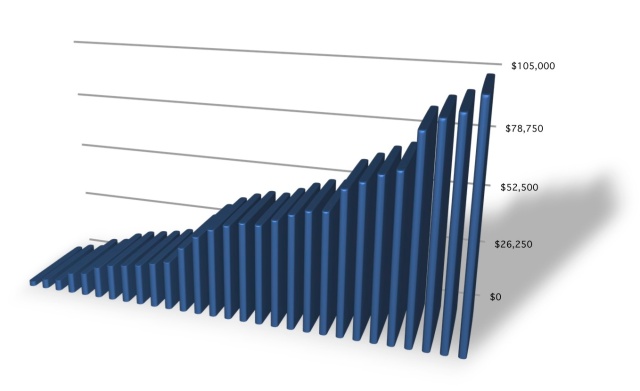 Interestingly, the shows have appeared to break down almost evenly between beneficiaries: 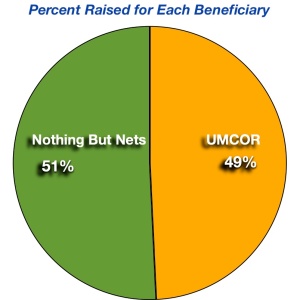 And, finally, one last chart that shows the amount of money we’ve raised each year of our band’s life: 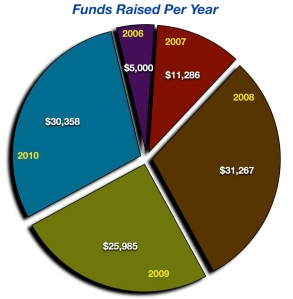 A few comments on this last graph…

We only did three shows that very first year. We did four shows in 2007, and raised double the money of the year before. 2008 was the year we really broke out, doing quite a few more shows and having what was, up until now, our best fundraising year ever.

However, as you can see, 2010 should theoretically blow the lid off of this. We are only $900 away from breaking that 2008 total, through just FOUR shows!!!

But here’s the final fascinating statistic…

Of the $100K that we have raised so far, $61,000 of it has come in just the past 13 months! Almost two-thirds of what we’ve raised alltime has come in the last one-fourth of our band’s life.

We’re all more than a little blown away.

People ask us, “So what’s happened?”

I think the main thing that’s happen is YOU. You have traveled all across the Metroplex to see show after show, and you have told or brought your friends with you to each succeeding show. Our average attendance is certainly rising, and with that, so has the incredible generosity of our audiences. And that’s because of YOU.

Earlier this year, I was having dinner with a musician friend of mine; a guy who has a lot of experience in the folk/acoustic music world. He had been reading about the band, and I was telling him about our crowds.

And we do. All of us in the band know what an incredibly amazing thing this has been. It’s a blessing to us to be able to play music together and that, in four years, we’ve managed to keep this fairly big ship going. It’s a blessing to have so many folks come out to shows, and to give them a chance to not only enjoy the music, but also do something good for the world. It’s a blessing to help the local church, and the general image of Methodism in North Texas.

Several times in the past years, we’ve heard clergy colleagues tell us “You all are the best thing our Annual Conference does.”

And that’s deeply gratifying. But why not more? How about a few more “outside the box” ideas?

A part of what makes the band interesting is folks seeing ministers in a different role…enjoying themselves as real people. There’s an approachability there that is important to us.

As one “fan” told us after a recent show: “There is something inherently trustworthy about a minister who can rock out.”

I like that. We all do. We’re more honored than proud to be a part of it…humbled and wide-eyed, really.

We’re pleased to be a part of something that is such a “win…win…win” for us, the church, and everybody who comes.

And, as we have said many times before, we say thanks to God…and thanks to all of you.