Important relearned life lesson during the past few weeks:

I am not in control.

I know this. I really do. I teach/preach/sing it all the time. I celebrate with others when they re-discover it too. But it seems to me that the most important life lessons get learned and relearned. We have short memories. The light comes on, then flickers off again. Or, sometimes the light just dawns slowly. 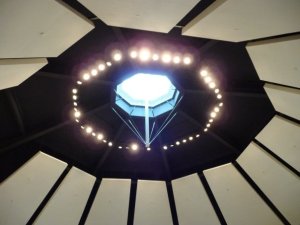 Speaking of lights, the thing that helped me relearn this important life-lesson were some lights. Sanctuary lights, to be specific. You see, back in late May (on Pentecost Sunday to be exact) the main lights in our sanctuary burned up. At least one of them caught fire and shed a small piece of burning plastic that drifted 50-plus feet down, onto the head of a worshipper.

It was pretty spectacular.

And, yes, it’s true: tongues of real fire fell on the heads of Northaven members during Pentecost Sunday worship.

Anyway, I missed most of it as it happened during the postlude and I was already out in the hall. But Mary Clair came running out of the sanctuary, screaming “Call 911!”

I thought somebody must’ve fainted or gotten sick, so I went back in to find everybody just kind of staring quizzically up at the ceiling. No one was injured and a quick flick of the switches insured that none of the remaining lights would sizzle out in similar fashion. (btw: I have mused a bit at how everybody just stood there, staring up, seemingly unworried about the potential of additional burning debris…)

So, we spent much of the summer making due without lights that are now affectionately known as “The Ring of Fire.” Which wasn’t bad since the Sun is so high in the sky and stays up wonderfully late. But as September shadows started to grow, we began to get antsy about it. OK, I began to get antsy about it. I knew that there would come a time when natural light wasn’t gonna get us by. Even more to to the point, that there’d be a time when the Sun would literally set on some evening events.

Sure enough, on one particular September Sunday, it was cloudy and rainy and it was really really dark in the sanctuary.

So, replacement parts were ordered. An idea was formulated to “hard wire” each light fixture. (They’d been on tracks up that point…)

The goal was to get them in before a major event early the next month: The “Second Monday Series” with Monsignor Don Fisher. It was scheduled to meet on Thursday, October 1st. (Don’t ask…)

The parts for the lights finally came in on the Monday of that week, a week that our building manager, Chuck Cummings, was scheduled to be off. Nevertheless, the work needed to be done. And, the installers told us that it would probably take two days of work.

What could possible go wrong?

It’s really quite a spectacular thing to see the lights being worked on, btw. Here’s a pic or two: 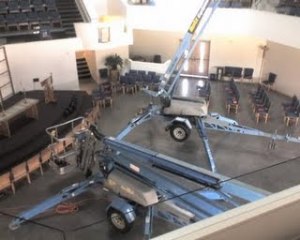 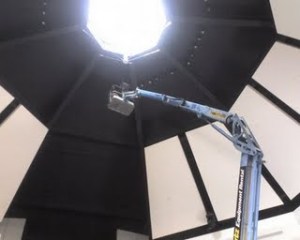 They are so high up in the sky that it takes a huge crane, which literally drives in through our double doors, to get up there to them.

Anyway, work began Monday on the two-day job. But the two-day job turned into two-and-a-half. As you can see from the pics, there are eight sections of lights. By noon Wednesday, only TWO of the eight were done!

Yikes. Anybody can do the math on that and see we’re not gonna make this deadline. We might not even have lights for Sunday at that rate!

So, we made alternate plans, just like John Lennon said. We reset the big meeting room upstairs full of chairs, and I called Bob Stewart, our layperson in charge in this program, to break the bad news. We’d probably have to move upstairs and that probably would mean not enough chairs for the 200 or so folks we expected might come. Bob was disappointed, as you might imagine. I was too. I mean one bad experience like this could kill a whole program, right?

Still, we were ready with Plan B.

Then, by noon Thursday, things looked like they were turning around. Suddenly, the workers had surged ahead and SIX of the eight light-poles were finished. Wow. That changed everything. It meant that there was every chance we could get this done in time for the event that night. And if we could move back in the sanctuary that would be clearly preferred.

So, I jumped up into the ceiling myself, to readjust the performance lights. You see, in addition to the “Ring of Fire,” the sanctuary has some robotic and “Lekko” lights that normally are pointed at the chancel area, choir, organ, etc. (Think mood lighting).

During our months sans the Ring of Fire, we’d moved them around to provide light for worshippers. Which is really not a great idea, since all they really do is blast stage lighting into the eyes of people who are not used to it.

But, I knew that really we probably needed to readjust those lights too. As Chuck was off, and other volunteers who have moved them before have literally themselves moved to Arkansas, I got up there and got busy.

Well, after about an hour and half of that, I was almost done. But just then, I gashed my knee. Pretty spectacularly too. Bent down and cut a nice seam down the middle of it on a metal junction box that I just didn’t see. So, I climbed down out of the ceiling and told everybody that I had to go home to fix it up. (Yes, it can be told now, I probably should have gotten stitches…)

As I left, I looked up and the workers were still working on those last two light poles. It appeared they’d gotten nowhere in the past two hours. It didn’t seem to me that there was any way these lights were getting done. I mean, not only did they have to finish and re-aim the lights, but they had to drive those big cranes out, sweep the floors and reset all the chairs.

So, as I bled across the floors, walking dejectedly to my car, I thought “What a waste…we’re not going to make it.”

Even worse, I’m not going to be able to be there to help. I literally can’t help because I’m too hurt.

I got my knee bandaged, change my clothes and make it back to the about 5 pm. And much to my shock, the cranes were gone, the floor was swept, and the lights are ON! Wow! What an amazing recovery.

I gazed up at the lights for the first time in several months, filled with the satisfaction that a crisis has been averted through hard work, planning and dogged determination. It all worked out because WE worked hard it. My cut knee was worth the sacrifice!

So, I go into my office for a scheduled 5:30 meeting with some folks. And somewhere around 6 pm, a HUGE thunderstorm rolls in. I mean HUGE. Suddenly, there’s a massive lightening strike…probably a quarter mile away. And….all the power goes out in the building! All of it. Total darkness.

So now, not only do we not have lights in the sanctuary, we don’t have AC, a sound system, or a way to see in the bathroom. 200 people coming in t-minus 55 minutes and counting, and probably on their way at that moment. Oncor will only say that the power will be out until at least 9 pm, well after we’re scheduled to be done.

What a demoralizing turn of events. All our hard work and planning for naught.

So, we pull out every known candle in the building (and we do have a few…) and put them in the sanctuary.

When Monsignor Fisher arrives, about 20 minutes ahead of the event, we tell him the situation and he laughs and responds quite graciously.

I said, “Well, thank you for your understanding attitude,” and then I turned to hand an altar candle to a woman so she could light her way to the bathroom. (She was Catholic and I think that mortified her a little, btw…)

Actually, there by the candle-light, the sanctuary looked quite lovely. I mean, the topic *was* contemplative practices. Maybe nobody would notice?

At a little after 7 pm, I got up to make a welcome and apology to the crowd. I felt really defeated, but tried not to let on. We’d worked so hard to get the room ready. I’d sacrificed with my literal blood and sweat. At least the lights were off so nobody would see my knee bleeding through my pants.

Then Bob Stewart got up to introduce the Monsignor. It’s so dark, he can’t even see his written notes.

Bob finishes with a flourish and says, “So, would you please welcome Father Don Fisher.”

And right as Don Fisher takes the center stage, with the applause still ongoing, the lights came on! As if on cue. Stephen Spielberg could not have timed it better.

Peals of applause turn into laughter.

Then, everyone stops laughing and begins to settle in. Monsignor Fisher picks up the mic and simply moves on as if nothing at all strange had happened.

I, however, am at the back of the room, still laughing so hard that I almost have to excuse myself. Between giggles, I snap this Treo picture of Monsignor Fisher: 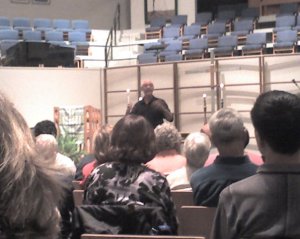 I am pretty sure it’s blurry because of my chuckling.

I am laughing at myself.

I am laughing at my own hubris that believed that whether or not the lights came on had anything to do with me, or were any kind of reflection on me and my ministry. I am laughing at my bleeding knee, in the way I assume Jacob eventually laughed at his night of angel-wrestling.

I am laughing at how hard I was trying to be “in control,” and how futile that always is.

I know this. I really do. But, probably like many of you, I forget. I expect to be able to work hard and be rewarded –perhaps even lauded– for my efforts. I expect accolades for going the extra mile.

Which reminds me of a great line that Len Sweet posted to Facebook just two days ago, apparently a Jewish proverb:

One of my favorite learnings from Jim Finley has been this little way to enter into a time of meditation. It’s a way to “center down” beneath and beyond our thoughts. He encourages us to say these lines and, in between, breath in and out deeply, making sure to be conscious of your breathing:

Whenever I do this exercise, I find myself immediately centered back down into myself, into a deeply spiritual place. It’s a powerful reminder, again, that I am me, that I am not you, and that I am not God. I am not all-powerful.

Every now and then, if we’re lucky, the truth that we are not in control is a light that dawns on us, whether or not the real lights ever do.

One thought on “The Light Dawns Slowly”