One of my favorite films is “The Shawshank Redemption.” And as the year “turns,” I am thinking about that film, about its lead character, and about a concept I write about almost every year at this time: “Resolve to Not Resolve.”

The film was based on the short story by Stephen King, called “Rita Hayworth and the Shawshank Redemption.”
(btw: spoiler alerts, and an assumed familiarity with this classic film, follow…)

Andy Dufresne (played by Tim Robbins in the film…), was an expert at how to “Resolve to Not Resolve.”

Before I get into that, it’s now time for my almost annual plea to you:

If you want to do great things in 2019, whatever you do, DON’T make public New Year’s Resolutions.
Don’t make a big, outward show of the inward changes you want to make in your life.
Instead, as NIKE says, “Just do it.”

I first learned this from entrepreneur, Derek Sivers, and his TED Talk. The moment I heard it the concept, I knew I was hearing something deeply wise that I needed to pay attention to. (The next section is lifted from some previous writing I’ve done on this…)

Sivers cites this data: “Tests done since 1933 show that people who talk about their intentions are less likely to make them happen. Announcing your plans to others satisfies your self-identity just enough that you’re less motivated to do the hard work needed.“

The psychology is like this:
— You resolve to be a runner.
— You tell everybody.
— You do out and buy running shoes.
— You admire your new shoes, and your brain says “HEY! I’m a runner.”
— You never, or rarely, ever do actual running.

Since I first wrote that last series of sentences, I’ve learned much more about brain chemistry and function. I’ve learned that when brain scientists hook us up to machines they find that THINKING about a thing is exactly the same as DOING a thing….at least inside the brain. Right down to a slight release of feel-good dopamine.

We THINK about being a runner?
We trick ourselves into believing we have ALREADY run…that we are already a runner.

When, in fact, all we’ve done is buy the shoes.

They KNOW you’re gonna do this. Pay attention. They put the running shoes, the exercise equipment, the spandex pants…right up in the front window during these weeks of late December/January.

They don’t *care* whether or not you will ever BE a runner.
They care about selling you the shoes.

So, how do we make progress toward our goals this year?

The problem for many of us is that resolutions function as this very kind of short-circuit I’ve been describing here. We fail at resolutions, not because we are inherently weak, but because resolutions are never enough on their own.

Now, *some* folks do seem to understand and embrace this difference between being and doing. They make a resolution, and then they do it. And then they report back on how they have done it.

I both admire and HATE those guys.

Because it never works that way for me. I make the resolution, and I end up stopping there.

For me what’s become far more important is “holding an inward intention.”

Inwardly. Meaning: without telling anyone. But, instead, by DOING small things toward the goal every day.

And this is where Andy Dufresne steps in as our Patron Saint of “Just Do It.”

Be that one who chips away at overwhelming stone with a small rock hammer.

He never quits. He never stops. And! He never tells a soul what he’s doing.

For all the world knows (even his closest friends), he just looks up at that movie poster on his wall. (In the book, it’s Rita Hayworth. In the movie, it’s Raquel Welch. 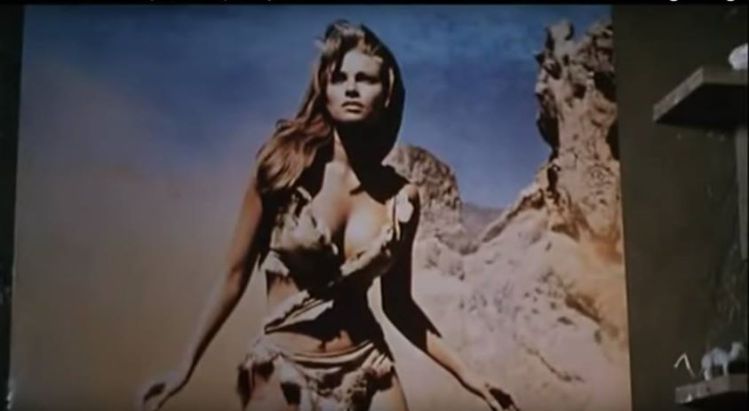 Day after day, everyone else in the external world thinks Andy is leering at Raquel.

What he’s really doing is looking at his path to freedom….the hole he is slowly digging behind…

At one point Andy Dufresne says this: “That there are things in this world not carved out of gray stone. That there’s a small place inside of us they can never lock away, and that place is called hope.”

Hope, in the spiritual sense, is always beyond the event-horizon of this world. But, to KEEP hope, we need small victories along the way. And, if our hope is to do great things, we must allow those small victories to light the path of our future hope, and not depress us that we have not travelled farther.

In th end, whatever goals you may have for this coming year, I’m here to tell you that you can do them.

But it’s far more important to be Andy Dufresne every single day, than to just publish a resolution on New Year’s Day.

It’s far more important to hold an interior intention that you work toward with singularity and focus, than to surround yourself with external trappings and markers.

Lift up your rock hammer, and start chipping away at the stone.

And, next year on this same day?