A little more than a year ago, some social justice friends invited me to offer a prayer from our United Methodist tradition at a protest. The protest was outside the corporate offices of a company involved in the Keystone Pipeline. I was happy to go, and offer prayer.

But at the end of the protest, it was announced that the group would then adjourn from there and march to the private home of the CEO of the company.

I informed some of the leaders that I would not be joining them. I told them, “I draw a hard line at protesting at someone’s home…”

I’ve been thinking about that moment a lot in the past few weeks, as I continue to hear stories that trouble me…

Stories of progressive activists confronting conservative politicians in public spaces, such as restaurants…
Just today, the story of the “doxing” of Republican Senators by a Democratic intern…
Vague insinuations and threats that I see on social media, about confronting politicians in their homes…

I cannot support these kinds of action, ever.

These things are fundamental violations of The Golden Rule:

“Do unto others as you would have them do unto you.”

They also tear at the very fabric of civil society itself. Further, encouraging the private harassment of public officials can “morally license” the disturbed, the mentally ill, those on the margins of society, to lash out in unpredictable violence too. We have seen this all too often.

This does not mean there is no place for protest.
There is. Of course there is.

Surely my friends who know me will know that I’ve been to dozens of public protests in recent years.

Americans have the right to express their beliefs. For myself and for many others, our passion for protest comes from our Christian faith itself.

All this —the right to protest, the right to worship and believe— is guaranteed under the First Amendment.

But my own personal view is that the First Amendment rights we cherish can only exists when we also follow The Golden Rule. The Golden Rule even trumps the Constitution. It’s older and wiser. It predates America by several millennia. 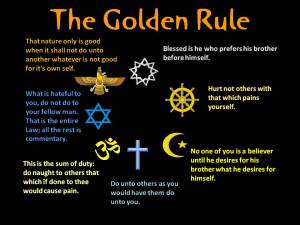 Protest government officials in their work places, fine. Even protest at corporate offices (Given the Citizens United ruling, it’s hard to see corporate spaces as “off limits”).

But draw a hard line at homes, places of worship, restaurants, movies, etc…

Do unto others as you would have them do unto you.

As many of you know, my wife is an elected official. As I’ve just noted, I also engage in a *lot* of protests in the streets. So I believe I have a unique vantage point to all sides of this issue in ways that are deeply personal.

To be specific, then…

I was deeply troubled to hear of how Senator Ted Cruz and his wife were recently treated while out to dinner. (I was pleased to see Beto O’Rourke speak against it…). I would never want anyone to confront my wife and I in such a way.

I was deeply troubled to read of recent threats against Senator Rand Paul.

And I was greatly troubled to hear today’s news of “doxing” by an intern of a Democratic lawmaker from Texas.
There are other examples I won’t list here. You get the idea.

And to anyone on the “Left” who might want to argue with what I am saying here, I invite you to remember Dr. Martin Luther King for a moment.

Dr. King led many public marches/actions in many public spaces. On more than one instance, racist extremists terrorized King’s family in their own home. And yet, he understood the principles of non-violent resistance well enough to know that the Golden Rule applied.

Dr. King marched across the Edmund Pettus Bridge and —despite how tempting it might have been— *not* up to Bull Connor’s home.

If we cannot exercise basic civility in public spaces, then we have already lost some of the very freedoms we claim to want to protect by engaging in non-violent action in the first place.

These issues know no ideology or “side.” Activists in all sides tend to push things too far in the heat of passion.

For example, when I was an associate pastor at Highland Park UMC, one our members, Dr. Norman Tompkins, was relentlessly targeted by “Operation Rescue,” the radical anti-choice group.

All because he refused, on principle, to sign their pledge to not perform legal abortions.

BTW, Dr. Tompkins always insisted that abortions were not a major part of his practice. He simply refused to be intimated into rejecting a legal procedure as a part of his medical practice. Other doctors signed the pledge, and then did abortions anyway. Dr. Tompkins took a moral stand against intimidation.

He paid dearly for standing up for his convictions. For months, protestors gathered in front of his home, every Saturday. They left threatening messages on his home answering machine. The passed out leaflets on the cars in the church parking lot which were titled “A Spirit of Murder at HPUMC.” (See attached…) He wore a bulletproof vest to church on Sundays.

These events clearly rattled the Tompkins family. And while they sued Operation Rescue, and won, the costs were high and they eventually left Dallas.

While he was publicly confident in what he said to the media, I saw the private fear and and weariness these events brought to his wife and him.

It was during that time, as the Tompkins’ story came up around the dinner table one night, that my Father first told me about his *own* protests as a young man. Something in Tompkins’s story led Dad to tell me this story…

In the early 1960s, my Father was a rabid “anti-Communist.” He and other young anti-Communists were convinced that President Kennedy was “soft” on Communism.

While temporarily living in California, Dad and Mom decided to join in a protest of a speech President Kennedy was giving in Los Angeles.

They met up with several hundred anti-Communist protestors at Hollywood High School, and marched to the theater. But when they arrived, they found they were positioned at the *back* of the theater, near a side door.

The speech ended, the alleyway was dark and there was little action where they stood. When, suddenly, the side door opened, and lone figure emerged.

It was Frank Sinatra.

Sinatra was trying to sneak out that side door, unseen. But the anti-Communist quickly saw him. The large crowd started to menacingly growl, and move toward in toward him, hoisting their signs.

Dad realized it was all of *them* up against that one, lone celebrity. It was hardly a fair fight.

Dad said, with a great deal of regret, “Eric, I could see Frank Sinatra’s eyes…I could see the *fear* in his eyes.”

As the spouse of a public official, I understand that fear in Sinatra’s eyes…or the fear in Rand Paul’s eyes.

You might get a Schaudenfruedistic glee (did I just invent a word?) through reading these recent stories on the news. But, to me, they are chilling and disturbing.

We must find a way to allow a right to privacy for all Americans, especially those with whom we disagree. We must rediscover a basic dignity that respects our political adversaries, even if, and *especially when,* they do not respect us. What makes The Golden Rule hard is living it out when you feel like nobody else around you is. That’s exactly when it’s most needed. Today feels like one of those times.

Finally, to any Progressives who might want to argue with all I’ve said here, consider for a moment what happened at Highland Park UMC, back in the day, among Dr Tompkins’s friends.

It would be fair to say that his Sunday School class was mostly filled with very conservative Republicans. Probably many of them were, politically aligned with a “pro-life” position. (They met each Sunday, just outside my office…)

But their reaction, in response to his being picketed, was to rally AROUND him, to support him, not the protestors…with whom they had some philosophical agreement!!

So, to today’s progressive activists, who may believe direct confrontation of your adversaries in public spaces are a good thing, I say to you: You politically mistaken. You will simply encourage sympathy for those you are publicly confronting.

But, make no mistake, the *far greater* reason to reject this strategy is not a political one. It’s a moral reason about doing unto others.

Picket, march, write letters, organize.
Gather in public spaces, and make your voices known.
Exercise your constitutional rights as much as you wish.
That’s the heart of our freedom.

But in doing all these things, do unto others as you would have them do to you.

The Golden Rule is old and wise.
And more than ever, desperately needed in our society.