I’ve gathered my favorite videos and pics from our #UniteAgainstHate March and Rally over the weekend. For those who didn’t hear, I’ve been honored to be a part of a multi-faith, multicultural group, that has been meeting/planning for several weeks, to make some response to the growing tide of Islamophobia and hate coming from politicians and preachers.

Saturday, we held a march and rally in the Fair Park area of Dallas. More than 300 folks braved wind and rain to stand together against the forces of division and fear.

I thought I’d post some of my favorite pictures and videos from the event.

Perhaps the best//shortest montage that can give you a flavor of the day was created by the Dallas Morning News:

Here’s a short video and message that I made during the march itself, alongside primary organizers Alia Salem and Dr. Michael Waters, that describes the message we wanted to send:

And here are my full remarks at the rally after the march:

Our planning group (still technically un-named) met in persons and via the phone over a period of several weeks. We were all –Jew, Christian, Muslim, Atheist, and others– deeply disturbed by the increase in Islamophobic hate speech by both politicians and preachers in the United States.

Recent terror attacks, here and abroad, had caused the burning coals of hate, which always rest under the cool white ash on the surface, to be inflamed again.

We knew we needed to act quickly to come together and spread a more positive message. 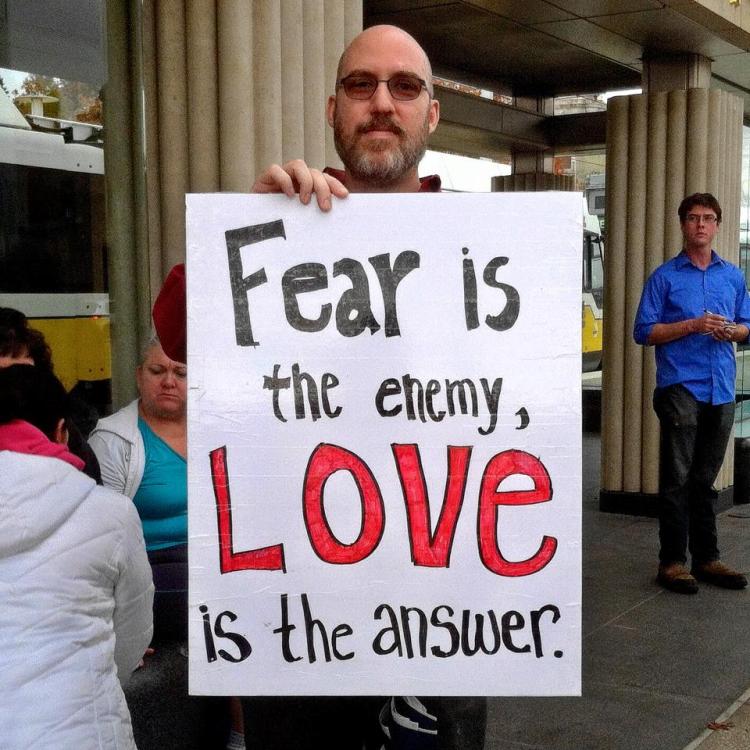 Our initial plan was to be a counter-protest to the KKK, who had announced a rally at the Irving Mosque. However, they postponed their march….and the Mosque simultaneously requested that we not come to their doors. They, quite fairly, are a little tired of being an epicenter for what is, in truth, a problem that exists everywhere.

Dr. Waters was able to use his contacts to secure use of the MLK Center, with only a few days notice. And even with the rain and wind, three hundred hearty souls showed up to show the best of what America is:

I’m struck by how Northaven’s slogan –initially imagined in response to LGBT issues– is to very apt here too:

This is my favorite picture of the day: Rabbi Nancy Kasten, myself, Alia Salem….Jew, Christian, Muslim…three faiths all standing united against hate and division:

We had a nice group of Northaven folks who showed up to march.

And this is a nice pic of most, not all, of the organizers…at least those we could find after: 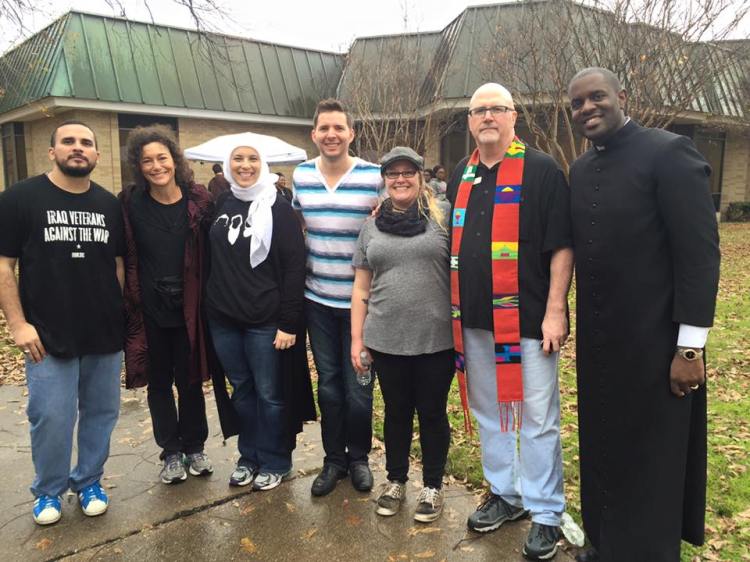 Some of us who took part stated ahead of time why we thought this event was important. Here’s what I said:

1) Because discrimination against anyone for their faith is a threat to the right of all of us to worship God as we are called.
2) Because both the world and our own people need to hear the message that America will not be divided by race, religion or culture. We are stronger together. The way to BOTH defeat terrorism *and* reduce fear at home is for us to witness to our nonviolent and peaceful unity.

Guns at home, and terrorism anywhere speak a message of fear to the world.

Nothing can defeat their power but love, peace, non-violence, and a trust in the basic goodness of the American people.

I give great thanks to Dr. Waters, Alia Salem, and all the many other folks behind the scene who did the heavy lifting to bring us all together.

We intend to keep this movement of unity going, and to build and broaden it.