I’ve stayed out of this whole mess as long as I can. But it’s about a week later, and folks are still talking about FOX New’s Megyn Kelly, and her statement that “Santa is white.”

It’s been covered. It’s been dissected. Lot’s of other folks have opined a lot of things.

What’s got me flummoxed is this. In the same piece, she also throws down that “Jesus is white.”

But nobody’s talking about this, are they? To me, an opinion about the ethnographic status of an actual historical figure —and opining something so clearly wrong— is far more controversial and interesting than saying “Santa is white.”

This week, Megyn Kelly offered a clarification of sorts about all this. But it didn’t get any better when it came to her discussion of Jesus, which was basically limited to this one line:

“By the way I also did say Jesus was white. As I learned in the last two days, that is far from settled.”

No, actually Megyn, it is kinda settled. And my point today is to wish that you, and many more journalists, were talking about how settled this is, instead of Santa’s race.

Go ahead, look it up.
Because you can Google till your fingers bleed, peruse the stacks at Bridwell Library, and you’ll not find a lot of credible evidence that “Jesus is white.”

There’s even a whole branch of theology devoted to talking about the historical Jesus. Unshockingly, it’s called “The Quest For the Historical Jesus.” Books like Reza Aslan’s “The Zealot” are a contemporary example of this.

I’ve never been a big fan of “quest” theology. It’s often an interesting read. But, ultimately, much of it leaves me cold in the end, and never “proves” anything. It feels like a lot of trees getting killed for something that will always be, at most, creative speculation.

Having said that, a general understanding of Jesus’ historical time is pretty important. And Aslan’s book was really helpful in painting that picture to an new audience that was probably clueless about a lot of it.

That understanding can lead us to some basic ideas about who Jesus was, as a human person. And the  well-accepted-consensus  is Jesus was a Jewish man of first century Palestine, who probably looked a lot like other men of his historical time.

Science, of course, can help us with this too. Using the techniques of forensic anthropology, some very geeky folks have now done that, and this is generally what they’ve come up with:

You can read about their whole fascinating process here.

Is that an actual picture of Jesus?
No, of course not.

The bottom line is this: There’s an academic certainty approaching 100 percent that Jesus was not Anglo.

Which gets me back to the title of this blog, and my flummoxedness (Yes. I just made that word up) about all this.

How is this not getting covered more?

How is it that we’re wasting all sorts of ink, bits and bytes, talking about the fictional ethnicity of a fictional character, and there’s been almost zero conversation about what she said about Jesus?

It’s probably a result of several things, it seems to me.

Santa wins (in the culture, at least). And we’re uncomfortable, anyway.
First, it’s probably a good bellwether for just how completely the consumer Christmas has conquered the real one. The culture’s a lot more obsessed with Santa than with Jesus.

But more than this, I think we haven’t heard much about it because it cuts the core of our spiritual and theological beliefs. And it’s a lot easier to talk about a fictional Santa than a real Jesus; and what we do and don’t believe about him. It also also brings up some painful history too.

The truth is that politicians and pundits throughout history have used an ethnically white Jesus for their own devices. “Jesus is white” was a theological/spiritual “truth” for racists in the South.

No, I’m not saying that anybody and everybody in our time who would say “Jesus is white,” (including Megyn Kelly) is racist. But you’ve got to at least grant me the historical truth of the fact that racists loved the “Jesus is white” Meme.

Slavery was “acceptable,”  in first one hundred years of our nation, not just because it was legal commercial practice, but also because it was theologically ordained by the white god of the heavens. (Lack of capital letters is intentional…) White supremacists down the present day cling to these kinds of beliefs.

Racism, true racism is always a combination of a human prejudice (“Jesus is white“) and the ability to enforce it on unwilling others. (“Prejudice + Power= Racism”)

My point in bringing up this painful past is that there’s a dangerous underbelly to all incarnational theology. It can become a way of believing God ordains my group, my tribe, my race to “lord” over all others.

Personally? I am sure I started out with the view that “Jesus is white.” I saw this picture from Warner Sallman a zillion times in small churches growing up: 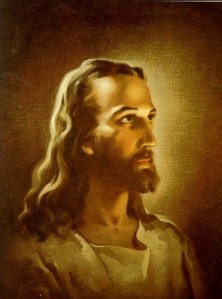 It’s an iconic picture. You can read more about it here.

But even by college, I realized that Jesus’ particular ethnicity wasn’t Anglo. That was obvious. That shook, changed, and remolded my view of Jesus. I suppose these days, when I think of Jesus’ ethnicity I imagine somebody a lot more like the Popular Mechanics picture than the Sallman one.

In my early ministry, I had the honor of worshiping at Trinity Church in Chicago, Illinois, the church made famous/infamous by their pastor at the time, Rev. Jeremiah Wright. It was a powerful Sunday of worship in their old sanctuary. It was a much smaller than the space they are in now.

There I saw a stained glass of a black Jesus, the first I’d ever seen. This picture is the one in their space now. It might be the same one I saw, although the one I recall seeing was a larger, full-length figure, and by the front door.

And I remember thinking, “Of course, they would have a Black Jesus…why wouldn’t they?”

It made perfect sense.

The important thing for Christians is to always allow room for our conception of Jesus to change, grow, and mature. If we start out seeing Jesus as one ethnicity, one of the powerful moves can be to transcend this, and be willing to see Jesus in other ethnic settings, and allow those to speak to us too.

If you’re interesting in learning more, Frederick Buechner’s “The Faces of Jesus” is a good place to start.

The Living, Incarnational Christ
We Christians don’t “worship” the historical Jesus anyway. None of us do, And even if we tried to, we’d be worshiping a theoretical idea, not the actual person whose historical specifics are forever shrouded behind a veil of history and time.

We worship a Living Christ, who transcends race, culture, and yes even creed.

In the garden, on the first Easter morning, when Mary proclaims “I have seen the Lord,” she’s no longer just talking about a guy who looks something like that Popular Mechanics picture. She’s talking about a Messiah who she has come to know as savior.

When the Disciples spread this word to others, they were speaking primarily of the “risen Christ” not just the historical Jesus.

The point of the incarnation is God coming to earth as a human being, so that we could relate to God. God in human form is for our benefit, not God’s. Christmas is about believing that our lives, our world, ourselves are graced and touched by the Spirit of God.

By all means, see Jesus as an specific ethnicity, if that is helpful to you. But don’t believe that the Christ, the Savior of this Season, could ever be limited to your view alone. Had Megyn Kelly said “Jesus has always been white for me,” I might have let her off the hook a little. In fact, Reza Aslan has a great discussion of all these same issues, where he all but says that, for Megyn Kelly, Jesus is white. (Some good stuff here…)

But as a journalist, she had a great opportunity to talk about these very issues. And she missed it.

And, frankly, every journalist in the past week has had a similar chance. But all I hear is crickets. Zip. Nada. Nothing.

So, the preacher steps in to make the point, I suppose.

Buechner’s book says it this way…

“The man on the cross was a man of flesh, but he was also the WORD made flesh, as John writes it in the great prologue to his Gospel, the Word that ‘became flesh and dwelt among us, full of grace and truth.’ The Creator himself comes to dwell within his own creation, the Eternal within the temporal, the Invulnerable within the wound. It is as if Shakespeare could somehow have entered the world of Hamlet, say, the dramatist descending from the infinite dimensions of reality into the dimensionlessness of his own drama, becoming a character in his own plot although he well knows the tragic denouement and submitting himself to all its limitations so that he can burst them asunder when the time comes and lead a tremendous exeunt by which his whole dramatis personae will become true persons at last.”

Joan Osborn made the same point when she sang, “What if God was one of us? Just a slob like one of us?” Although many fail to see it, she strikes very close to the heart of the true Christmas message here.

Yes. God is one of us. Able to abide with us in our greatest sufferings and our greatest joys. Present in the beautiful diversity of all God’s children everywhere. But breaking through our ethnicities as well, reminding us –as Jesus reminded the people of his hometown, Nazareth– that God will visit and care for people of many races and creeds.

I’ll close with the best Christmas song to help remind us of all this.

It’s the classic, “Some Children See Him” by Albert Burt. (And I’m deeply indebted to bandmate and preacher friend, Brian “Doc” McPherson, for reminding me of this at just the right time today…)

The final verse says everything I’ve been trying to say here.

And I can’t think of any better way to close this, than to read the words, and hear my favorite version from James Taylor:

“The children in each different place
Will see the baby Jesus’ face
Like theirs, but bright with heavenly grace,
And filled with holy light.
O lay aside each earthly thing
And with thy heart as offering,
Come worship now the infant King.
‘Tis love that’s born tonight!”