I’m never really sure exactly when it will happen, but Christmas always comes. A true grace of this season is that –despite our best efforts at killing it– one way or another the true light manages to shine through.

I was beginning to worry that maybe this year it wouldn’t happen. But then, it did.

For me, Christmas happened yesterday, December 23rd….Christmas Eve Eve. No matter what the calendar says tomorrow, yesterday is when Christmas came for me.

Our Northaven Youth decided that instead of sitting in front of their televisions this Christmas week, they’d do service projects. So, they did two; one Monday, and one yesterday. Yesterday’s was at the Rainbow Room of the Resource Center of Dallas, down on Reagan Street. Fifteen of our youth, and a few adults, piled in cars and headed down to serve lunch to the clients.

May I first say, as an aside, that I am very proud of our youth that so many of them wanted to spend their holiday reaching out in love and service to others. We adults could take a cue. (Just sayin’)

The clients who take their noon-meal at the Rainbow Room are mostly folks living with HIV/AIDS. Many are long-term survivors. Most are on a dizzying cocktail of medications that, all told, keep their life livable for them.

But many of the folks who wander through the Rainbow Room on an average weekday are among the poor in our society. Some live on the streets. Others have various addictions. For still others, it’s just pretty clear they simply have a hard life, and are deeply grateful for a hot meal, and a place to rest for an hour or so in the middle of each day.

We arrived to find a small cadre of volunteers and staff getting things ready.
We donned aprons, hairnets, serving gloves. We spread out along the buffet line…a few kids serving entrees…breads…desserts….drinks, etc, etc….

And here they came. An hour and a half-worth of folks looking for perhaps their only hot meal of the day.

And there….in the midst of piped in Christmas Muzak from Josh Groban…surrounded by some plastic garland, tinsel, and a twinkling artificial tree….there, amidst worn linoleum floors, folding chairs and plastic tables….

In that room filled with suburban kids, and street-wise/worn survivors. African-American, Hispanic and Anglo men, who looked beaten down…some who look very very sick. And others who looked, well shall we say, flamboyantly glamorous. Yes, in the midst of that cross-section of humanity were a few gender-bending dressers too.

One that stood out was a radiant and smallish African-American man who was dressed in a solid-white outfit…with a solid white hat that looked like it might have belong to Auntie Mame. He might be living on the streets, for all we knew…but he was on the streets in style.

So, then, we got done serving the meal there, and we took the kids back to the church. But I had one more errand that day…to deliver my sound system to the Christ’s Foundry United Methodist Church. I’m lending it to them for some weeks because they don’t yet have a permanent one. And, tonight, they need it.

Because, about the time we finished our 11 pm worship at Northaven, Christ’s Foundry UMC will also finish their first-ever worship service in their new building.

And as that service ends, they’ll gather beneath their new bell tower, and ring the bell precisely at midnight. (btw, the bell apparently has a lovely tie to Atlanta, Texas. But that’s a story for another time…)

This congregation of mostly Spanish-speaking immigrants –whom we have the grace to serve as a “Covenant Church”– will experience the joy of their first worship on, of all poignant moments, Christmas Eve.

And in the midst of these two disparate moments yesterday, Christmas came. It came because, through God’s grace, I was reminded again that this is how Christmas always comes.

Christmas is about God’s incarnate grace and love, given to the world. It’s about remembering the grace and beauty of God’s presence, which is, truthfully, always around, all the time.

But, he goes on to say: “According to Christianity, it’s the way things are…”

“All religions and philosophies which deny the reality or the significance of the material, the fleshly, the earthbound, are themselves denied.  Moses at the burning bush was told to take off his shoes because the ground on which he stood was holy ground (Exodus 3:5), and incarnation means that all ground is holy ground because God not only made it but walked on it, ate and slept and worked and died on it.  If we are saved anywhere, we are saved here.  And what is saved is not some diaphanous distillation of our bodies and our earth, but our bodies and our earth themselves.”

And to all who doubt, or who are uncomfortable with such definitions of incarnation, Buechner politely reminds us: “One of the blunders religious people are particularly fond of making is the attempt to be more spiritual than God.”

“Behold, bring you good tidings of a great joy, which shall be to all people. For unto you is born, this day, in the City of David, a Savior which is Christ the Lord.”

Our friend, David Hayward, The Naked Pastor, has a cartoon this week that I love:

(David has another version, not G-rated, that I like even better. I’ll let yall find it…)

And, yep, that’s pretty much it. No “Important people there.”

And THIS is where, the story of our faith tells us, God is born into the world. In the midst of grubby and grungy stable…in the midst of those the world might consider, “unimportant people.”

Which is why I thought of Christ’s Foundry yesterday. As I looked up at the rope to their new bell tower, I thought of our how world so often considers immigrants to be “unimportant people.” But they are not unimportant to God.

It’s also why I thought of the Rainbow Room…and those quiet folks….struggling with their life, day to day, on the streets of Dallas. For it was there I saw Christmas. Plain as day. Some might call them “unsophisticated” or “undignified.” But if so, that’s what incarnation is.

God come to earth, in the face of all those beautiful Rainbow Room friends. God as powerfully present in that moment as in our most heartfelt church prayers in any sanctuary. 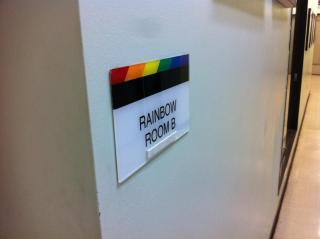 Here’s a clue to knowing when it happens. Remember that amazingly beautiful feeling you feel at Christmas Eve at church? In that moment, when we sing “Silent Night,” light candles against the darkness, remember those feelings of love, peace, hope, and joy?

Well, sometimes in life, we feel that same feeling. Through the smile of a child, the embrace of a friend, an act of service to the world, the stunning beauty of nature, through some moment that connects us to to someone or something in this beautiful world of ours.

Those moments are what incarnation is. And when they happen, they’re likely to feel like that moment when you light Christmas candles and sing “Silent Night.” So, look for that.

But be ready for it to break in at some unexpected time, when you’re hanging out with “unimportant people.”

It might even be heralded by some cross-dressing angel named Gabriel.

And if that seems “untheological…unsophisticated….undignified?”

It may only mean that it’s a true Christmas moment, worthy of the Messiah who lived among us as “Word made flesh.”