Below, there’s a new version of a very old song for you. But first, a story….

Because, if you grew up in Dallas, even almost fifty-years later, you know what today is.

Yes, it was a deep and scarring event for the entire nation. But for those of us from here, it’s always been a deeper, more personal, experience. Almost everyone alive at the time has their own memories of the day. But I’d argue that there’s an extra layer of feeling and memory for those who live/lived here, in the place where it happened.

Almost everybody in America can tell their “Where were you?” story of that day. And there is a kind of collective catharsis to sharing them; precisely the same way we now tell stories about September 11th.

But it was not until I went away to college that I realized this.

I know this will strike many as strange. And it’s not just because I was barely one-year-old in November of 1963; too young to have my own story.

What I mean is that –as a kid growing up in the Preston Hollow neighborhood of Dallas, less than eight miles from the School Book Depository, in the shadows of both the physical buildings and the historical time– nobody ever talked about the Kennedy assassination.

If adults around me ever did mention it, it was in hushed tones. Hushed, pained, perhaps even humiliated, tones. It was unmentionable. It was a heavy pall, a weight in the shoulders of every adult I knew. I understood implicitly not to talk about it. Not to bring it up. I was well into my late high school years before I was fully sure exactly which of those downtown buildings was the “depository,” or even exactly where Dealey Plaza was.

Remember, until 1989 there was no museum, no place to have a public conversation about these things, much less a private one.

For better or for worse, average folks in Dallas took the Kennedy assassination hard. They took it to heart. There was, in some national circles, a kind of “What’s wrong with Dallas?” crusade.

Of course, today –in the light of dozens more crazed lone-gunmen over decades that have come and gone– we understand now that these things happen. They happen just about everywhere. Crazed gunmen strike lots of places. 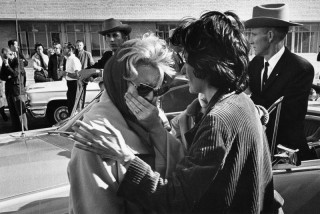 But there was a kind of all-pervasive Kennedy guilt that overcame Dallas in the years afterwards. You can ask anybody who was an adult here at the time, and they’ll tell you about it. And that was something I did feel.

You could make a very very strong psychological argument that Dallas’ reputation as a city that always wants to “look good” can be traced back to that very day. You could make the strong argument that, although everybody knew it wasn’t really Dallas’ fault, that many adults here still secretly prayed, “Please God, don’t let them blame us…”

When I grew up and started writing songs, I knew I’d write about this. Not about the assassination, or even really even about Kennedy, but about the people of Dallas. The adults I grew up around. The parents of my friends. The teachers and Sunday School teachers I had. The folks that worked in stores. The people with the heaviness in their shoulders, and the fear that they might, somehow, really be guilty.

Part of my current digital archaeology was recovering the master files of the song I finally wrote. I’ll say more in a moment.

But for now, here it is.

And, isn’t that a stunningly beautiful fiddle solo by the incomparable Reggie Rueffer?

I wrote this song a long time ago. I believe it was 1985. Alan Gann once told me, “Only a person from Dallas could have written this song.”

And, I think he’s right. I’m really proud of it.

For the record, I don’t think Dallas killed Kennedy. But I think we’ve always felt the guilt this song hints at. And, actually, some of the guilt might well be justified; and I know that sounds contradictory. So, bear with me. You see, the song itself gets at some of the deeper truth.

The deeper truth is that, in November of 1963, Dallas was an extremely conservative place. The John Birch Society had one of its largest outposts in Dallas. People had, in fact, spit on Adlai Stevenson. Others had pushed around LBJ and Lady Bird on the streets of downtown. The day before Kennedy’s arrival, there were “Wanted for Treason” posters hung around the city. 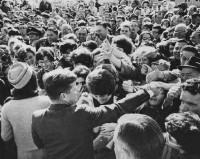 These were known parts of local history. In 1963, “Liberals” were, in fact, not tolerated very well. Personally, I don’t think the average folks in Dallas really thought about it very deeply. It was a conservative place. He was a northeastern liberal. But, he was also THE PRESIDENT. They were glad to see him visit. I am sure they would be pleased once he was gone.

But, there was a great deal of civic pride at his coming to Dallas.

This history, this song, and even my ministry, would collide in ways I could not expect, when I was appointed as Senior Pastor of Northaven Church.

For it was there that I was reminded of a story I’d heard, years before. In fact, it was a backstory story in my mind when I’d written the song originally, fifteen years before coming to Northaven. Rev. Bill Holmes, Northaven’s Senior Pastor at the time, preached what became a quite controversial sermon, three days after the assassination.

The title of the sermon was “The One Thing Worse Than This.” And while I won’t repeat the whole thing here, the gist of it was that this assassination was, indeed, the worst thing that had ever happened to Dallas. But, to Holmes, “the one thing worse” would be for Dallas not to take a hard look at the harshly polarizing rhetoric and politics of its time…the things I’ve just mentioned…the spitting at Stevenson…the pushing of LBJ…etc…

And! Holmes listed one thing he’d been told about that week…that schoolchildren had “cheered” when told of Kennedy’s assassination. It was this last example of intolerance that garnered the most attention. News folks heard about the sermon, and a crew from the CBS Evening News stopped by the church early the next week, and filmed Bill Holmes re-preaching the sermon to an empty sanctuary. (Remember: no videotape in those days…)

Walter Cronkite ran lengthy excerpts of it on his newscast. Then, the you-know-what hit the fan. Holmes got death threats and, at the suggestion of the Dallas Police, went into hiding for a week. City leaders quickly rose to deny that “children had cheered.”(2) It was one of the events that changed the future history of Northaven Church. Folks left. Others who stayed, were shocked.

“Why the outcry?” they wondered. Holmes had done nothing but speak the truth, after all.

And, even if you deny all the things Holmes listed, the mere fact that he was forced into hiding for a week proves his point, doesn’t it? The reaction to the sermon proved the point of it.

Holmes’ main point reverberates down with us to this day. Hateful speech can contribute to hateful action. We don’t like hearing this any more today than we did back then. But it’s always been a truism, in every generation.

No, Dallas didn’t kill Kennedy. But that guilt, that feeling that we might have something to feel guilty about, has driven this town ever since.

Since being at Northaven, I’ve met actual people who were actually there. Meaning, folks who were in the room at the Trade Mart, awaiting President Kennedy. (Our friend and Northaven member, Jan Sanders, among them…). I’ve talked to other adults who were around at the time. They have confirmed this sense of “guilt” that average folks felt, the conservative ethos of the town, and the depressing pall that hung like a cloud over this town for so many years. It’s gratifying to hear folks confirm what I’d written about…what I’d already known, even if nobody talked about it when I was a kid.

The thing that finally got people talking? The Sixth Floor Museum. Opened in 1989, it’s one of the only places I always strongly encourage out-of-towners to visit.

I know it’s been a healing place for everyone who has visited. But it seems to me it’s especially healing for us Dallas folk. I cried the first time I went through…just remembering all this stuff…remembering all that silently-carried burden of all those average folks who lived here…remembering the senseless loss of a great President; who might have merely been tolerated here, but who was deeply loved elsewhere.

Dallas has changed quite a bit since then. Northaven is no longer a fringe progressive ship in a conservative sea. Dallas County itself –socially, politically, culturally– has not only moderated; but you could make a pretty strong argument (based on election results) it’s swung to the left. (A fact that still eludes many longtime observers…)

Two years from now, we’ll commemorate the 50-year anniversary of this event. That’s a lot of water under the bridge. Generations of kids have now been born who weren’t alive when all this happened.

And so, for better or for worse, they’ll never know the heavy pall, the silent guilt that, once-upon-a-time, hung over my city.

(1) I realize that this was not actually the name of the venue. Kennedy was to be the guest at a lunch in the Dallas Trade Mart. The actual room was called “The Great Hall” which, lyrically, would have worked. But I wanted to have the name “Trade” in there, to hint at where the building was. So, yes, I knew what I was doing. It’s just a song…go with it…

(2) I, for one, have always been puzzled by the tempest over “children laughing.” City leaders, and sincere Dallas historians, continue to deny that it ever happened. This, despite the fact that the Sixth Floor Museum invited Rev. Holmes back for an event, attended by many Northaveners (myself included…) where Bill revealed the name of the teacher who had told him this. Beyond this, another teacher, Joanna Shields (who you can find in the pews of Northaven every Sunday, to this day) also reports children cheered at her school too.

But, look, kids do inappropriate things. They’re kids. So, let’s throw out that one instance. All the other stuff…spitting on Stevenson…pushing LBJ…the “wanted for treason” poster with JFK’s image…the large John Birch group….all these are undisputed by anyone studying the history. So, it seems patently silly to pretend that debunking the “children cheered” story would have ever changed Rev. Holmes’ main point. It didn’t then. It doesn’t now.

3 thoughts on “Sitting In The Trade Hall”