Santa Cruz shipped my guitar back to me on Friday, and I’ve been blissfully playing around with it ever since.

For those of you unaware of this pitiful saga, you can read the whole sad tale here.

Here are some pics I found online of the Santa Cruz repair shop. Below, you’ll find some before/after pics. The truth I can finally stand to tell you now is that the main damage was three very large cracks down the back, a crack that ran completely around the seam between back and side for the bottom half of the guitar, and two more small cracks in the front. Later, I would find that almost every interior brace was cracked or popped out by the force of the Highlander’s weight.

Stephen Strahm, their repair guru, told me a story about those braces. From what I can gather, Santa Cruz braces their guitars in a sort of “tongue and groove” fashion (my words, not theirs) so that the braces tuck underneath the side somehow (I am sure I am not describing this well…).

Instead of breaking, some of them had apparently popped out. Stephen said that he had never seen this before, and found it so interesting that he showed it to Richard Hoover. And Richard said he had never seen it either. As Stephen was relating this on the phone, he sounded amazed and astounded…like a geneticist discovering some new piece of mutated DNA for the first time. Like I’d somehow advanced the cause of Santa Cruz Guitar science.

Anyway, the main gist I got from that conversation was this: it’s something of a miracle the force didn’t crush the whole thing.

So, here are the “before/after” pictures. Looking at them here, they don’t really do justice to either state. The cracks were more horrible than this looks, and the repairs far more beautiful and seamless than these pics can relate.

The biggest of the three cracks in back was this one. The main work they did was to put an entirely new back on, and the wood matches perfectly. Amazing… 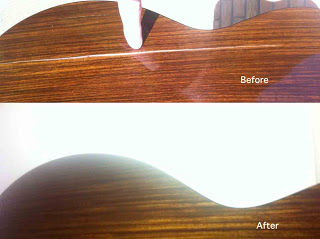 Then there’s the crack between the back and side. Like I said, it ran around the entire bottom half of the guitar, and up to the soundhole on either side, and was really the thing that make it unplayable, I am sure. Luckily, it mostly ran along the seam, but that’s still a HUGE crack to fix. As you can see, again, the work is amazing: 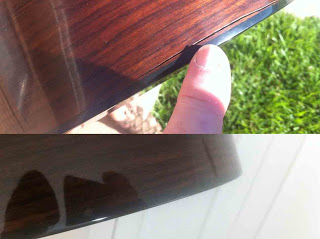 Here’s the same crack from at the very bottom of the guitar. As you can see, it didn’t just split right along the wood. But they fixed that too:

When I wrote that other, self-pitying blog, Butch Morgan left the comment that it would probably sound better when I got it back.

And, I have to say, I think it does. Amazing.

Other pics of me unpacking it Friday. Note the aire of incredulity in what they wrote on the repair tag…. 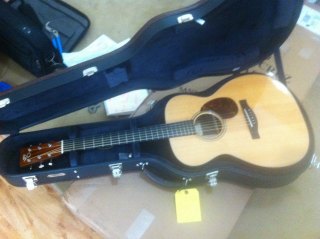 Finally, to give her a nice test, I sat down and recorded this old song of mine yesterday. Just a way for me to hopefully share my joy.

I hope to have some gigs so you can hear her live soon….EF