Another horrible natural calamity, and Pat Robertson has again opened his mouth, inserted his foot, and generally embarrassed people of faith.

I won’t repeat what he has said, but the gist of it is that he has claimed that this catastrophic earthquake befell Haiti because they are under the spell of demonic powers.

Basically, he has taken an actual “folk tale” that Haitians tell themselves, and passed it on as if it’s historical fact or theological truth.

Haiti, as you must know, has been a country of heartbreak for more than 200 years. While it’s the second oldest free democracy in the Western Hemisphere, it has never flourished the way anyone imagined a democracy might. (A cautionary tale for “democracy-spreaders” in our own time, btw…)

There are myriad reasons for this…internal corruption and fighting…strong dictators who did not develop the people…foreign interference.

Lots of things have gone wrong, generation after generation, in Haiti.

And so, surely the people began to ask themselves: “WHY?!”

As someone who’s been there five times myself, I ask that a lot…why is a country filled with such beautiful and spirited people beset by so much heartbreak, year after year after year?

One explanation came in the form a story Haitians tell themselves. The story goes that the founder of Haiti, its first “Liberator” from the French, made a deal with the Devil. Basically: help me free the country, and the country will serve you forever.

In theology school, we called this an “Etiological Narrative,” a story that gets told to explain “why” something is the way it is.

At least, that’s what the ancient people who wrote Genesis believed.

It doesn’t mean it *literally* happened that way. But as human beings saw a blue sky that sometimes opened up and rained, as they saw the blue of the ocean that sometimes met the curve of the sky, there was a certain logic to the explanation. It helped something confusing make sense.

It’s more poetry than scientific fact…more folk tale than history book. It’s a story humans tell themselves to explain “why things are the way they are.”

This is the case with this folk tale from Haiti.

BTW, lest you believe such tales only develop in “poor and backward” countries, I would remind you of the “Curse of the Bambino,” the story that –until just a few years ago– lovers of the Boston Red Sox told themselves about their woeful place in baseball history.

Nobody in Boston *really* believed God had cursed them (New Yorkers are not allowed to weigh in on this… ;)) It was a *story* they told themselves to explain their plight.

There is not one shred of historical proof that this Haitian “curse” ever happened. It’s a LEGEND, that attempts to explain the hardship of Haiti.

Unfortunately, Pat Robertson opened his big mouth and repeated it as if it was FACT, as if it explains something *real* about the history of Haiti.

But there are even *more* reasons to condemn Robertson here.

God does not send natural calamities to sinful people, any more than God gives extra goodness and wealth to the faithful.

The rain, Jesus says, falls on the just and the unjust.

God does not curse entire societies to lives of suffering. 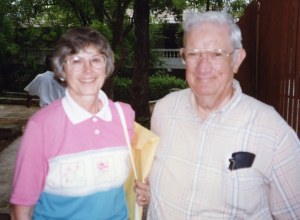 It’s easily provable in this case, by reminding you that my dear friends, Lila and Ken Foree, are currently trapped in Haiti, with a team of twelve. Lila and Ken have led mission teams there, from Highland Park United Methodist Church, for more than 30 years. I had the great good fortune to be in Haiti with them five times, while I was Minister of Outreach at that church.

I do not know two more holy and humble people than the Forees. To my mind, I place them alongside of Mother Theresa, in terms of their commitment to the poor and suffering. They have spent (literally) years of their lives, thousand of dollars of their own resources, in the country of Haiti…and in the city of Petit, Guave.

For years, I have wanted to write a long blog about my experiences in Haiti and specifically to write about Lila and Ken, who I consider among my dearest friends, but I’ve never gotten around to it. (I am sure I will soon…)

I mention them now because, as many in Dallas will know, they are currently stuck in Haiti in the aftermath of that earthquake with the current incarnation of those mission teams. Communication is tough. But it is known that all members of the group are accounted for and alive. (I am aware that there is probably additional encouraging news coming out today, but I am not at liberty to share, nor is it entirely confirmed…)

God would not send an earthquake to punish Haiti when there are so many decent, loving Haitian people…people with incredible hearts, generous spirits and abiding faith. And God would not punish the saints I know: Lila and Ken Foree.

And in fact, if you actually READ the Bible, you find that, time after time, God is especially present in places where there are suffering people…marginalized people…forgotten and poor people. God has a special love for the suffering, sick, and poor. Far from reigning judgment down on them for being in this condition, God call us US to serve them, love them, and minister WITH them, all the more.

So, given the state of the devastation there, my first reaction was to want to curse Pat Robertson…to scream at him…to rant through this blog at his total ineptitude and the shame of his words.

Then, I read this Facebook post from my friend and colleague, Rev. David Weber, who has helped to “center me” once again:

“My prayer is that Pat Robertson gets to experience genuine grace before he dies. Whatever foulness infected him early and has grown unabated must be a terrible and difficult burden. Do not envy him, do not try to follow his teachings. I actually feel some compassion for him, while hoping his “ministry” will fail so that others would not be stained by his anger.”

David’s absolutely right. In a strange way, I too feel compassion for him. He is so *clearly* misguided, and his words are such a vast caricature of the values and teachings of Jesus, that I hope and pray nobody really takes him seriously.

Yes, I know he has ardent followers who do. But most people know in their guts…in their souls….just how wrong he is.

I will probably write much more about Haiti in the coming weeks. (And I may have video of a brief appearance I made on Channel 8 this morning…)

I am heartbroken for the country, personally, and the truth is that I’m *not* taking it all in…because if I did I would simply be a puddle of tears of the floor.

I can’t go there yet….except for a few moments here and there.

It will take years and years for Haiti to recover. This earthquake has affected rich and poor alike there. The rescue effort itself will be slow and halting, as even the rescuers will be dealing with their sense of loss and injury. I am sure (as they asked me off-air at Channel 8 this morning) that I some of my Haitian friends have died.

I just can’t take it all in yet.

But I will say much more.

Right now I will say this:

Pray for ALL the people of Haiti.

Pray for ALL the rescuers now on the way.

And two more prayers I have to ask of you:

Pray for my friends stuck there now.

And pray for the heart of Pat Robertson.

But, please, do not listen to him.

Here is my plea for gifts to UMCOR.

Here is my reflection on the three United Methodists who died in Haiti, including one on a mission team I used to help lead.

Finally, here is my sermon from yesterday (audio file) that tells some stories told to me by those who survived the earthquake with the HPUMC team. It includes some of the same stories in the previous blog.

21 thoughts on “Please Do Not Listen to Pat Robertson”